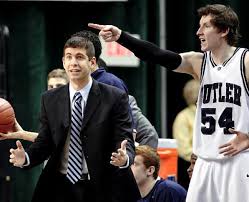 The right fit is what all recruits and coaches should seek in one another. Brad Stevens (left) and Matt Howard (right) might be the best fit in Indiana since Quinn Buckner and Bob Knight.

To reach their potential, Boston Celtics coach Brad Stevens and former Butler star forward Matt Howard needed each other.  Stevens won Howard’s on early mornings when others had something better to do.

Eight o’clock pool play games at the Best of the Midwest tournament in July, 2006, were played in front of families of the players and few others.  Stevens was one, and his showing up early and late for meaningless games between 16 year-olds were crucial in his rise to one of the best jobs in coaching.

Diligence is how you win in recruiting and life, especially when dealing with a young man like Matt Howard, who prizes loyalty and hard work above all else.  Without Howard, Stevens would still be the head coach of the Butler Bulldogs, who would still be members of the Horizon League.

Howard was a change agent in so many ways, and he was missed by a lot of coaches for whom Howard didn’t pass the eye test, but not Stevens.  He was there for every game, and that meant something.  One of the great traits Howard has always embodied is in how he recognizes the best traits of his teammates and helps them succeed.  That was overshadowed by his floppy hair, big feet, and occasionally awkward looking work around the basket.  That he outplayed Kevin Love the two times they faced one another was overlooked as others played with more grace but less production.

No one keeps legitimate stats during the summer schedule, and even if they did, arcane rankings for who assisted on the most made three-pointers in summer basketball history would never be calculated.  In the absence of real data, I am going to proclaim Howard was the all-time leader.

In the summer of 2006, Todd Lickliter was the head coach for Butler, but as he continued the tradition of winning at Hinkle Fieldhouse, the University of Iowa called to have the latest successful coach in the tree that produced Barry Collier and Thad Matta bring some of that cultural magic to Iowa City.  Lickliter is now the head coach at Marian University, which shows that timing still counts.

That opened the door for Stevens, who was ready to welcome Howard and Zach Hahn from that summer team he spent hours and hours watching.  Howard brought the same remarkably unselfish talent to Butler that he showed through his three summers with the Spiece Central Stars, and that led Butler to consecutive NCAA Championship games in 2010 and 2011 that would have featured some other lucky team had he decided to play at Miami of Ohio, Purdue, or Xavier – the only other schools who seriously pursued him.

Without dragging himself to those meaningless games, the relationship between Stevens and the Howard Family would not have blossomed.  If not for the relationship, Howard goes elsewhere.  And if Howard goes somewhere else, Stevens would be a respected coach with a compelling story – for Butler.

There are people who choose to sleep in, and then those who show up everyday.  The people who are there tend to get lucky, and while Stevens’ ascension from unpaid volunteer to head coach of the Boston Celtics involved doors opening at the right time, it would never have been possible without those early mornings at Warren Central High School watching a summer team whose successes exceeded the sum of its parts.

Matt Howard is playing basketball for ratiopharm Ulm of the German Basketball Bundesliga these days for a lot of money while Brad Stevens is living his dream as the Celtics coach for a lot more money.  Both guys work hard everyday at everything they do because that’s who they are.  They do what they love, and they trust that who they are is the right thing to be.

Great people tend to recognize successful traits in one another, and that’s certainly the case in what has been a strikingly positive relationship for both.  With Howard, Stevens became the coach of the Boston Celtics.  With Stevens, Howard became the Academic All-America of the Year in 2011.