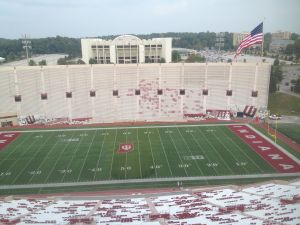 The view tonight of Memorial Stadium with college football’s tallest flagpole on the right.

If there is a university more in need of his zest for fun and excitement, I don’t know where it is.  Football has been an afterthought in Bloomington for decades, but regardless of the on field results, the people who come to games are going to have a hell of a good time thanks to Glass.

Glass hosted some media tonight to show off what Indiana Football fans will experience Thursday night for the first time when the Hoosiers host the first of their eight home games at Memorial Stadium against the Indiana State Sycamores.

There are a lot of ADs at major college universities doing relatively innovative things, but Glass is so damn earnestly enthusiastic about the improvements that are made by his staff that it’s impossible not to get excited right along with him.

If the players and coaches are as invested in their product as Glass is in his, the Hoosiers will shock the Big Ten and punch their ticket to a bowl.

Maybe there are moments of doubt and despair for the man celebrating five years at the helm, but it always seems like Glass is having the time of his life re-evaluating the educational experience of his athletes and the ways in which IU can become a leader in gameday experience.

There is no dearth of enhancements planned, and Glass is smart to know that fans and media are somehow fascinated by the -est of things, so when they erected a new flag pole near the southeast corner of the endzone, it was the tallest in college athletics at 154 1/2 feet.  It won’t be dedicated until the Navy game, but a 30 X 60 foot flag is hanging from it as I write.  There will be simple choreographed cheers for all manner of events – first downs, touchdowns, defensive stops (or tapouts), and all kinds of other stuff that will be implemented just because they are fun.

Fun goes a long way toward making a game enjoyable, and the best sometimes have nothing to do with the game itself.  One advancement this season borrows from both the Indianapolis 500 and Chicago Cubs games.  “Back Home Again in Indiana” will be performed prior to each game, just as it is before the race at Indy.  Fans like singing.  If you don’t believe me, watch a Cubs game as fans sing “Take Me Out to the Ballgame” during the seventh inning stretch and “Go Cubs Go” after every Cubs win.

If not for those songs, I’m not sure the Cubs would draw 1.6 million this season, and Glass knows it.  He mentioned the need to make the in-stadium experience more enjoyable than the at-home version of the game, or he correctly asks, “Why would people come?”

The afternoon was not without drama as the media folks were asked to run through the doors as the players will prior to kickoff.  They will be serenaded by loud fireworks, and as anyone who knows Glass a little surmised, we were greeted by them to.  I almost collapsed, as you can see in the video below, along with some additional video and comments by Glass as he describes what fans will see – and do – in just 72 hours.