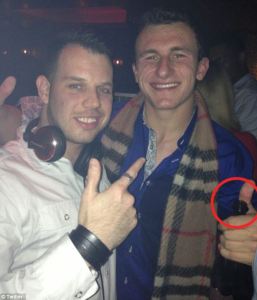 Not a fan of scarves, but I like a guy who circumvents bad rules, and even with a Heisman that might be his greatest legacy.

There is nothing morally wrong with lying to avoid the consequence of breaking a bad rule.  That may be shaky ground, but Johnny Manziel answering questions of the NCAA at this point is a lot like Colonel Hogan facing questions from Commandant Klink on “Hogan’s Heroes.”  You do what you have to.

Manziel is being hounded by the NCAA for taking cash for signing memorabilia – a violation of a bizarre rule that has gone unquestioned for a long time – as though it’s okay to restrict athletes from making any money at all because of the fame they realize as collegiate athletes.  Only the schools and NCAA can profit from that fame?

It’s a dynamic that is allowed to exist nowhere else in our society, and Manziel, through his reported indifference to the rule is causing it to come under scrutiny unlike any since it was enacted.

NCAA investigators were reportedly in College Station for six hours yesterday, spending a chunk of that that talking face-to-face with Manziel.

I doubt Johnny Football needs my advice, but if he took cash for signing, he should treat the truth with indifference.  Lying is a weak and loathsome act.  Without the truth, we all live in deceit, but accepting a penalty for breaking a bad rule clenses no one’s soul despite the writings of Henry David Thoreau.

And let’s face what should be a very strong belief – that there is no way Manziel wasn’t paid.  Anyone who has spent the hours necessary to sign 4,400 items knows it’s mind numbing and grueling.

Every year at Emmis Communications, I signed between 1,200-1,500 letters to organizations and schools asking them to use WIBC Radio as its conduit for communicating snow closing information to their employees and students.  I could get my pace to 10 per minute, but no faster.  To sign the 4,400 times ESPN is reporting would take Manziel over seven hours.  There is no way a sharp kid like Manziel would put himself through that misery without being paid.

That the NCAA legislates to the idiocy of of student-athletesn not being paid to the value of a brand is ludicrous, and is not deserving of the respect truth connotes.  Lying to those who enforce rules that equate to life’s speed traps is not just acceptable; it’s a moral imperative.

That Peyton Manning can drag a Sharpie over photos or leather and be paid six figures, and Manziel can’t is bureaucratic nonsense.  The elimination of the rule would cause a problem with boosters using the ability to pay a fee to an athlete for licensing as a de facto payment to a recruit of current player, but that is a smaller problem than the one the rule creates – restricting the ability a citizen to be paid to his value – a wonderfully American concept.  That the rule allows schools to reap all the rewards of its athletes’ fame makes it and those who endorse it corrupt.

There is no chance that Manziel viewed his supposed work in signing footballs and other swag as some Quixotic quest to reform the NCAA away from its arcane rules of amateurism, but his desire to be paid has put him in that very position.

Student-athletes deserve to profit from the the licensing of their brand, and that’s why the NCAA is sweating bullets over the Ed O’Bannon lawsuit that will evaluate whether the NCAA – or its member schools – have the right to require 18 year-olds to sign away the rights of their own image for eternity throughout the universe.

Manziel allegedly saw cash and was handed a pen.  He did what every other human being in America would do.  Sign his name, and pocket the bucks.  But he shouldn’t tell anyone, wink, or betray the fruits of his labor.  His family is wealthy beyond the dreams of all but a few, so a little bit of cash isn’t a red flag.  The NCAA can’t compel anyone to tell the truth, or even talk.

Everyone keeps his mouth shut, the problem goes away, and Manziel enjoys one more tour around the SEC.  Rules that can’t be enforced are useless, and the NCAA is learning that very quickly.