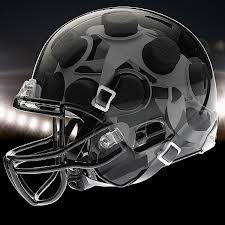 Here’s a helmet that can help prevent concussions, but few players will wear it.

More than 4,000 retirees and families from the NFL will share in a $765 million settlement of a lawsuit against the NFL brought by those who have suffered long-term head trauma playing pro football.

That’s roughly $180,000 each, minus the attorney fees.  If someone offered you $180K to live with dementia, would you do it?  Didn’t think so.  Now, if you were a lawyer and got one-third of $765 million and your clients lived with dementia, that’s a pretty good deal.

This post isn’t about how first we kill the lawyers, like Shakespeare suggested.  My son is one week into law school, so my opinions about the nobility of the profession are mellowing.  After all, these former players weren’t clever enough to anticipate the collective negative effects of repeated concussions, how big a check could they have gotten the NFL to write left to their own devices?

Helmets are flawed technology, and the NFL knows it.  They can’t admit it, or they open themselves up for future liability.  They also can’t mandate the use of a safer helmet like the Xenith X2 because that would require their admission that the current helmets protect players from skull fractures and nothing more.

Many players won’t wear the Xenith because they don’t look cool enough.  I spoke to a former Pro Bowl defensive tackle who said that even knowing what he knows now about head trauma and helmet technology, he would choose to wear the same helmet he played in.

This wasn’t some addlepated boob of a former player, this is a guy who is enjoying an outstanding post-NFL career and shows all the signs of being a very intelligent man.

As long as players refuse to acknowledge and embrace their responsibility to their own health, there will continue to be head injuries that cause minor problems during their careers, but have the potential to be major health issues down the road.

The NFL has enacted rules to curb head-to-head contact as well as the practice of tackling by leading with the head, but football (especially at the professional level) is a collision sport that can cripple, maim, or cause a good man like Dave Duerson to slowly lose his mind until he can no longer tolerate living.

Our ability to enjoy any portion of life is determined by the functionality of our brains.  Without them, the party is over.  Losing a kidney, spleen, appendix, gall bladder, or having lung or heart disease wouldn’t keep me from laughing at “Caddyshack.”  Screw with the hard wiring of the brain, and you stare puzzled at Rodney Dangerfield’s antics.  To what extent the NFL owes former players a cash dividend on their lost health is debatable, as the risks were patently obvious all the way back to 19th Century football, but to pay each player a net of just over $100K for their trouble seems unjust in the same way the NCAA suspending Johnny Manziel for just one half is.  Either Manziel took cash or didn’t.  Saving face with a first half against Rice penalty is bureaucratic nonsense at its most nonsensical.

Responsibility is an all or nothing game.  Either the NFL is accountable for the lasting effects of its employees, or it is not.  There should be no kind of, halfway, maybe, half-assed, toe in the water, non-admission admission.

Whether the NFL knowingly head back science, or purposely put players in harm’s way is debatable, but what is beyond argument is that roughly $120K is nowhere near adequate for a portion of the long term care necessitated by the repeated head trauma suffered by these 4,000-plus men whose efforts put billions in the pockets of owners who only wear hats to look stylish.