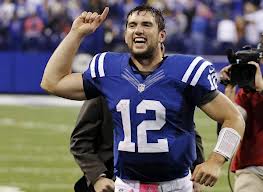 Andrew Luck has fun – always – and that means the Colts will too.

The NFL Preseason is a lot like Easter for kids.  They look forward to the holiday, and when it arrives wonder why they bothered.

Fans look forward to anything that looks a little like the game they love, but the starters are pulled after a couple of series, and everyone whines about the price of the tickets.  It’s as predictable as the sunrise.

It’s over now, and we are left with a very incomplete look at which teams will thrive, and which will suck.  We can guess that the Packers, Falcons, Broncos, and Patriots will be pretty good (although I have my doubts about the Pats), and that the Jaguars, Raiders, Browns, and Cardinals will suck.  In between, there is a crowd of good teams that can thrive with a couple of breaks and continued good health.

Now we await the cuts.  This is the most stressful time for players who are on the bubble.  Rosters will be peeled from 75 to 53 by tomorrow, and making a team means financial stability for a family while being cut means getting a real job.  Tough 24 hours coming up for players, but a lot of fun to play guess the roster for fans.  For Colts fans, it’s even more fun because the downside for screwing up is very manageable.

The Colts have some tough decisions.  Which mediocre safeties do they want to hold on to as back-ups?  I like the way Delano Howell sticks his nose into plays, and Larry Asante had 14 tackles last night, but Joe Lefeged was a special teams captain last year.  We all think Caesar Rayford has made the club because of his five sacks.  And running back Kerwynn Bell has been good in games and workouts.  Will the Colts choose to keep a fourth back, try to stash Williams on the practice squad thereby other teams a chance to swipe him, or cut Donald Brown to save the reported cap hit of $2+ million?

General manager Ryan Grigson will sweat those decisions throughout the day, as he and his brain trust make the decisions that change the course of the lives of players, but the name of the fourth safety or ninth linebacker just doesn’t matter with Andrew Luck as quarterback.

Whatever happens with the cuts, Colts fans have to be thrilled they are not likely (knock wood) to see anyone but the resplendent Andrew Luck under center.  Of the 22 starters for the Colts, two can be described as possessing special elite talent.  Those are Luck and future Hall of Fame receiver Reggie Wayne,  Other than that, mediocre to good everywhere.  Fortunately, that puts the Colts ahead of most.  Would you rather have the best young will linebacker in the NFL or the best quarterback?  Good answer.

As long as Andrew Luck is ambulatory, the Colts will be able to compete for a division title.  His physical makeup is outstanding, but what separates him from other talented quarterbacks is his leadership and attitude.  His unbridled enthusiasm for the mundane releases his teammates from cynicism.  That’s a complicated way to say he’s fun to be around.  Luck is a guy that sees work as an opportunity for fun, and when that’s the case, and team’s play can exceed the sum of its parts.

The Colts are the luckiest damn franchise in NFL history.  They were in a position to draft the best three quarterbacks of the last 30 years.  John Elway’s trade notwithstanding, being able to grab him, Peyton Manning, and Luck is an incredible run.

It’s not too early to put Luck in that company.  A single year that featured 18 picks and 41 sacks doesn’t scream hall of fame, but barring a physical malady that recalibrates his physical makeup, Luck will be among the top two or three quarterbacks of his generation, if not the absolute best.

It’s almost impossible to write about the Colts without waxing rhapsodic about Luck, who combines the best qualities of some of the best of all time.  He’s built like Ben Roethlisberger, keeps plays alive like Favre, and studies like Peyton Manning.  His late release allows him to guide the ball accurately under duress.  Colts fans who watched Luck play during training camp saw what a person who loves his job looks like.  Regardless of what you do for a living, doing it with the joy Luck shows during workouts will put you on a road toward success.

One thought on “Indianapolis Colts Preseason – Cuts Loom, But as Long as Andrew Luck Is Upright, Team Will Compete Well”