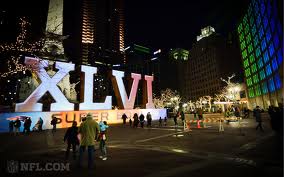 Indianapolis has decided to bid for their second Super Bowl in six years.  Don’t they know that Indy is never going to be deemed worthy as a regular stop on the Super Bowl rotation, and that the first go-round was a weather driven fluke?

They don’t and they shouldn’t because it wasn’t.

While other cities were designed to confuse, bludgeon, and exhaust visitors both emotionally and financially, Indianapolis was built to host huge sporting events.  With no apology at all to other cities, Indianapolis does it better than anyone.

There are other cities with friendly people, a stadium within walking distance of hotels, and the absolute ease of dealing with separate governments that work together for the betterment of the attendees (what a unique concept), but none do it all as well as Indianapolis.

That much was clear throughout the week prior to the Super Bowl in 2012 that Indy hosted.  For weeks prior, the staff at the radio station where I worked was a little less than thrilled that our annual trip to the Super Bowl was going to be to a less than exotic locale.  I kept telling them, “Just wait.”

They moaned about the potential weather issues, the lack of nightlife, and the overall malaise they falsely associated with Indianapolis.  In their minds it was still “India-no-place.”  Then they got to know the city.  The week they spent in Indy turned them all into fans of the city and its people.

There were hundreds of media people who flocked to Indianapolis for the entire week prior to the Super Bowl, and the chorus was unanimously positive.  That has continued for the last 18 months, and that goodwill can’t be replicated in any other way.

It’s not always enough to be consistently great at something – look at the Big Ten’s decision to alternate the home of its men’s basketball tournament between Indy and Chicago after Indy made itself a traditional favorite with fans and media – defying stereotype is an almost daily requirement for this city.  The NFL will make Indianapolis earn a second Super Bowl in six years.

Indianapolis doesn’t have an identifiable skyline, a nearby waterway, a pleasant climate, or famous food – minus the shrimp cocktail at St. Elmo’s, a casino or other guilty pleasure attraction downtown.  It’s lacking all the crap that screws up, but it does have ten things that separate it from other potential host cities:

Convenience – The airport is a 12-minutes straight shot west on I-70 from downtown.  There is no more convenient city in the world for the purpose of hosting a massive event.  Not only can tens of thousands of fans stay in a downtown hotel that is within easy walking distance of the stadium, but most never have to walk outdoors.

Nicky Blaine’s – Yeah, cigar bars are fading as cool places, but Nicky’s is a place where people can lurk in the catacombs and have a great time.  It’s not a meat market, but a place where good conversation and good scotch meet.  Hey, that’s pretty good.  If Nicky’s uses it as a tagline, I want my own table reserved at all times.

Cab fare?  We don’t need no stinking cab fare! – Sick of blowing your per diem on cabs?  In Indy, the money is spent on the important stuff.  There are cabs here, but not many.  No need.  Easy walk to everything of interest.

Ike & Jonesy’s – Remember what I said about Nicky Blaine’s not being a meat market?  Can’t say that about Ike & Jonesy’s.  For those looking to cast their own version of “Cougartown”, this is the place.  The music is easy to dance to, and the lighting is on the dim side, but could be a little darker.

Shrimp, shrimp, and more shrimp – If you were asked in what city is the restaurant that serves the most shrimp in the United States, you would probably guess several towns before you settled on Indy.  St. Elmo’s Steakhouse is owned by the very smart Craig Huse.  He knows that being the -est of something is key to success, and everyone knows that the cocktail sauce at St. Elmo’s is known as the hottest anywhere.  So everyone orders it.  When I took the staff from 101 ESPN out for dinner, I ordered everyone a shrimp cocktail.  Former Rams All-Pro defensive tackle D’Marco Farr was unaware of the spicy sauce.  He scooped a huge dollop of sauce on one of the jumbo shrimp, and popped the whole thing in his mouth.  It took a couple of seconds for the heat to build.  When it did, D’Marco had a terrified look on his face, jumped from his chair, and bolted away from the table directly into the path of a server who never saw him coming.  D’Marco’s final tackle came 12 years after he retired from the NFL.

Lucas Oil Stadium – It’s not the opulent palace that Cowboys Stadium is, but it is a great place to watch a game.  A stadium should reflect its city, and that’s the case with Lucas Oil.  It’s very functional, but not elegant or flashy.  Not only does the walking distance thing make getting to the stadium for the game very simple, but it’s the same for Media Day, and every other reason people need to head to the stadium for work or fun.

Crowds?  We’ll show you a crowd – A bunch of people visit the city hosting a Super Bowl during that week, and for most cities that number of tourists might be a once every generation challenge.  In Indy, 250,000 spend Memorial Day weekend here for the Indianapolis 500.  Indy knows how to accommodate and please giant groups of people.

Emmis Communications – What, I was going to list ten great things about Indy and not mention the broadcasting palace of America and the very welcoming engineering staff who make a visit to Indy so convenient for broadcasters in need of studio space?

Indy is not a bank breaker – You can find a $60 steak in Indianapolis, but you have to look for it.  Sure, the NFL bigwigs and corporate honchos on expense accounts don’t care what food and hotels cost, but for the fans Indy is a financial breath of fresh air.

Friendly and Humble People – I’m not sure why people here are so damn friendly, especially during the weeks of huge events, but they are.  Welcoming tourists and offering them a helping hand has been a part of the Indianapolis experience, it seems to be in the city’s DNA.  We understand the role of hosts, and treat the week like our giant house is hosting a family reunion.  And we know that Indianapolis isn’t New York or Miami – it’s a place where people too tired to continue west stopped.  Every pioneer who helped settle Indy said the same thing when they pulled their buggies or wagons to a stop, “Good enough!”  It is, and it should be for the NFL.  Nobody does it better.