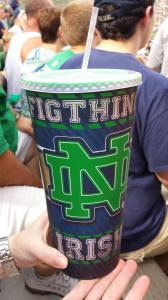 I hope Notre Dame didn’t order a quarter of a million of these very flawed cups.

So many damn games and so little time.  Flipping back and forth all afternoon is like a trip to Golden Corral – sure it’s all right there in front of you, but there’s no way to enjoy any of it because there’s just too much.

Most of the games were like Michigan vs. Central Michigan and and Georgia Tech vs. Elon – games that there was almost no chance for the paid opponent to win.  There were others like Alabama and Virginia Tech without enough context to draw meaningful conclusions about either team – maybe Bama is great and maybe Va Tech sucks, who knows?

A few things we do know…

Johnny Manziel is the same high strung kid America fell so quickly in and out of love with.  Either he is a hyper-competitive snot or an unabashed jerk.  Hard to know for sure because the media isn’t allowed any access to him.  Whichever it is, and it’s likely both, Manziel is certainly not in any hurry to change his behavior because of the last few months of attempted consequences thrown at him.

ESPN’s Robert Smith had it right when he spoke of the level of consequence needed to control his one and three year-old kids, and how Manziel has never been subjected to any of it.  It’s been written and said a million times before – the pain of change must be outweighed by the pain of staying the same.  Pain is coming for Johnny Football because the pain experienced by his coach is mounting, and Kevin Sumlin is going to want that noise to stop.  Answering for the antics of some brat is not what Sumlin signed on for.

The unsportsmanlike conduct for which Manziel was flagged undoubtedly involved a serious breach of obscenity etiquette judging by how the heads of the two officials snapped around.  Each time Manziel misbehaves, Sumlin looks weaker, and while the administration wants Manziel on the field, Sumlin’s reputation as a leader diminishes.  Manziel is a savvy enough gamesman that he knows as long as he keeps his nose clean off the field, it’s advantage Johnny Football.  But if he gets in another bar fight, Sumlin will bring down a heavy hammer fatal to his Aggie career.

Purdue quarterback Rob Henry was upset at himself for his play today at Cincinnati, and vented about it on Twitter:

Owning your poor play in a 42-7 ass-whooping is one thing, but publicly flogging yourself is bad form.  He would sound like an idiot if he tweeted something as trite as, “We’ll keep working confident that dedication will see us Boiler-up soon!”, but no need to present yourself with a public ribbon of shame.

A day of completing 18-35 for 161 yards and two picks isn’t anything to feel great about, but expressing defeat in such a public way, while goofily noble, is purposeless.  Henry should let his play next week speak for him.  Self-flaggelation doesn’t become a leader or quarterback.

Staying off twitter for a while because there obviously needs to be a lot more work done and a lot less talking on my part. #BoilerUp

There are reports that Brian Kelly is going to get an extension at Notre Dame despite being signed through the 2016 season.  Why schools feel compelled to extend deals that already stretch for years is beyond my comprehension.  Kelly is signed through the next four seasons already.  If he walked out the door, would Notre Dame have a tough time attracting another good coach?  Does Kelly possess some piece of magically unique charm that is so valuable the school simply must have it?  The universities should have the stones to welcome a coach bailing out.

More than that, why does a coach believe he deserves a massive extension before completing half of his original deal.  Seems wrong to me.

It’s a good thing that Brian Kelly isn’t responsible for the spelling of “Fighting Irish” on the cups sold at Notre Dame Stadium.  How about proofreading or using spell check – unless drinking giant tub of Coke is truly a “Figthing.” (See above)

By the way, Alabama is really good.  That’s not an offensive line, they are five human plows that blew the Hokies five yards off the line of scrimmage throughout the game.  This game, being won by the Tide as I write will be the 15th in a row won by the Tide away from Tuscaloosa.

And we still have Georgia vs. Clemson in an early battle that will remove a top 10 team from National Championship contention.  Mark Richt is a career 15-1 against the ACC while at Georgia, but that doesn’t put points on the board for the Dawgs tonight.