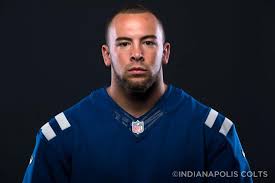 What is it with the professional football players?

When Indianapolis Colts rookie safety John Boyett was arrested at 2:52 this morning outside Tiki Bob’s on South Meridian, he reportedly told police, “You can’t arrest me, I’m a Colts player.”

During an offseason when more than 30 NFL players were arrested for a variety of offenses, including murder, day in and day out updates of police blotter information has been presented on Sportscenter.

A Colts player who shares the very same position as Boyett was arrested in Washington DC just over two months ago.  Boyett was drafted in the sixth round in April, so I would assume he read about Joe Lefeged’s transgression.

The old NFL player immunity ploy is not any more successful than the old “I’m an undercover cop ploy” or the old “I’m a friend of the bar owner and I’m testing the staff’s response to a drunken and abusive customer at his request ploy.”

Boyett also made the error in judgment of trying to elude police, and now faces resisting law enforcement charges in addition to disorderly conduct and public intoxication.

The Colts on the other hand are quite good at issuing reponses to these ridiculous events.  Their comment to WTHR-TV, “We are in the process of gathering the facts. Until we’ve completed that process we won’t be in a position to make any statement.”  When another Colt was arrested in 2010, Bill Polian’s comment was, “We are in the process of gathering the relevant facts.  When that task is complete, we will deal immediately with the issue of club discipline. Until we complete that process, we will have no further comment.”

Sounds like they have a whole lot more practice at dealing with players under arrest than the players themselves.

In order to keep the process of learning simple for those who slept in during the NFL’s Rookie Symposium on invaluable breakout session on how to avoid looking like an idiot while barely hanging on as a member of the active roster or PUP or reserve/non-football injury lists, we offer a very simple list of easy to remember rules to help avoid arrest (feel free to cut along the perforations and laminate for your wallet:

Getting arrested isn’t easy.  People have to show a complete indifference to rules and authority, and given that NFL players are almost uniformly unable to replace (or come anywhere close to replacing) the income available by playing in the NFL, not embarrassing the NFL is a wise career strategy.