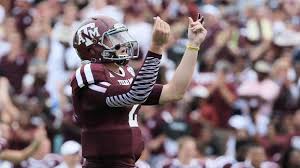 “Sure Johnny’s an idiot, but he’s our idiot!” is what Sumlin should say.

When I saw the discomfort of Texas A&M coach Kevin Sumlin during the postgame press conference following the win over Rice, I said, “He needs to cut Johnny Manziel.”  The noise needs to stop for Sumlin to effectively lead his team, but the reaction I thought appropriate was not the right course of action.

A manager of a high-strung employee like Manziel can choose one of three treks to deal with him – fire, tolerate, or support.  Tolerate is the weakest and the worst response – always.  I advocated firing Manziel after only considering the distress that the normally polite and considerate Sumlin expressed.

Put on your seatbelt and hold on for a violent u-turn because I was wrong.

What Sumlin should do is back his guy.  Tell the media to go to hell, and pat the kid on the ass.  Accept the occasional penalty as part of the cost of doing business with a player for whom winning the game is the only important metric of success or failure.  Manziel gets under the skin of opponents.  He’s a street fighter – a guerrilla – who knows where the unseen advantages lie.  Muzzling that asset strips him of his greatest talent.

Sure, he’s an immature tool of a kid whose parents enable his self-impressed lifestyle, but who gives a damn.  That’s not Sumlin’s concern.  Sumlin is paid to win football games, and Manziel provides the fuel for a winning engine.  And that’s all of Manziel, not just the palatable parts.

Sumlin should stand up at the next postgame presser and say, “Yes, Johnny’s tightly wound, and I love him for it.  I’m trying to get him to take it up a notch.  Football is about having fun, and Johnny’s having a great time winning football games.  The more fun he has, the better we are.”

Will that make him a more productive 40 year-old or a better father?  Who the hell knows?  What it will do is make the Aggies a better football team, and that’s Sumlin’s job as coach.  Let Manziel’s parents worry about the adult the kid will become.  Sumlin’s job is to maximize the potential of each individual person on the Texas A&M team to provide a stout unit willing to do what it takes to win the SEC, and Manziel being Manziel was pretty damn good on Saturday – 6-8, 94 yards, three TD, and six rushes for 19 yards.  He ended what had been a pretty close game.

Up by only seven points after the halftime break, Manziel came into the game for five drives that produced 24 points, and 28-21 became 52-31.  Matt Joeckel wasn’t too bad himself – 14-19 for 190 and 3 TDs – but Manziel lifts the play of the entire team by being who he is.  Sanding off the rough edges might remove a lot of what makes Manziel great.

If a tree is pruned too severely, it dies.  That’s what could happen to Manziel, and why Sumlin should put his stack of chips on the high strung kid who knows no other way to play – or live.  If Sumlin wants to host an intervention for Manziel, there will be plenty of time for that.  The behaviorally challenged have a long history of either huge successes or cataclysmic failures.

By many accounts, Mickey Mantle was no less crazy than Manziel, and neither was Joe Namath.  Since when do we assess an attitude grade for athletes?  Sure, we would like our sons to reflect the public persona of Cal Ripken Jr. more than Babe Ruth.

Life would be more easily managed for Sumlin and the administrators at Texas A&M if Manziel could will a lot of games without being a pain in the ass, but maybe the Aggies are winning because Manziel is a pain in the ass.  They should embrace Johnny Football.  Turn him loose.  Unleash the gamesman.

High strung, but good heart is a pretty fair recipe for a kid who is going to succeed at a high level or wind up in prison.  Penalizing Manziel severely is a massive behavioral dose of Ritalin, and sometimes it improves the output of the patient, while other times it corrupts the magic.

Sumlin should go see “Parenthood” for the scene at the end with Steve Martin finally embracing chaos and understanding that efforts to control are futile.