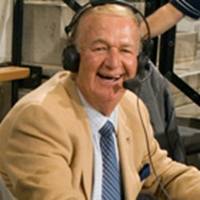 There are a lot of things that can change a child’s life.

One of those things for me was basketball. Growing up in Indiana, you hear all the stories. You hear about Larry Bird, Bob Knight, Glenn Robinson, Calbert Cheaney and probably the biggest legend Damon Bailey.

One guy always seems to be forgotten; that guy is Bobby “Slick” Leonard. Leonard won a national championship with the Hoosiers in 1953, beating the Kansas Jayhawks.

Leonard went on to have a very average NBA career as a player, averaging 9.9 points per game. However, Slick has had a greater impact after his playing days.

Every year the basketball Hall of Fame elects one ABA person into their hallowed halls, and Leonard has yet to receive the call. To simple basketball fans this may not seem like a big deal, but for someone who knows Slick’s legacy, this is a crime.

Leonard has said multiple times it doesn’t bother him not getting into the Hall, he instead wants to get all of his guys in. As of last year, his guys got in. Mel Daniels got into the Hall in 2012 (alongside another icon Reggie Miller) and Roger Brown finally got in in the most recent class. Unfortunately Brown didn’t live to receive his honor.

Slick’s guys have made it, and with this class coming up, I have no doubt that he should be the one finally getting the much deserved call this year.

I catch some grief sometimes for supposedly diminishing the legend that is John Wooden. John Wooden is no doubt one of the greatest coaches to ever coach basketball, 11 national championships as a coach is damn good evidence, but I have a problem. The Wizard of Westwood has a statue in downtown Indianapolis, a statue that will stand forever, and immortalize him forever.

My problem with this is the city’s real coach won three championships, and only has a banner hanging in the rafters of Bankers Life Fieldhouse. Granted this is a very high honor, but right outside of the arena there are steps that are vacant, naked, bare.

I wish the Pacers would come to their senses and put up a statue of Indiana’s real coach, a coach that didn’t leave, a coach that won for the city.

(Mark is a student at IUPUI, and is passionate about sports.  Follow him @marktinsleyjr)