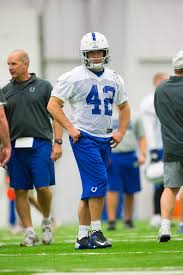 Being arrested is very good test of value for an NFL player.  If Colts safety John Boyett wanted to know where he stands as an employee for the team, he found out when he was released this morning – one day after his arrest outside Tiki Bob’s in downtown Indianapolis.

Boyett allegedly told police during his arrest that they could’t arrest him because “I’m a Colts player.”  Not anymore.

Millions of dads tell their kids, “Nothing good happens after midnight.”  No one under the age of 30 believes it.  They should.  Boyett should have as he was arrested two hours and 52 minutes after midnight.

Playing in the NFL isn’t a right, it’s a privilege – a privilege that Boyett no longer enjoys.

While there is a part of all of us that enjoys seeing the enabled and self-important deflated with the consequences that exist for the rest of society, this is a sad day for a kid who screwed up.

We all have moments of misery caused by facing the truth that we are no more special than anyone else, and a serious wake up call was made to Boyett.  He’s young and talented enough to learn from it, bounce back, and resume his career, but the legions of those with a tale to tell about how nothing good happens after midnight grew by one today.