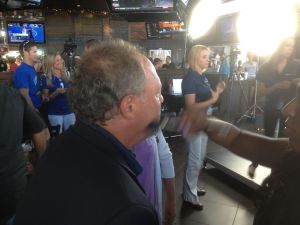 Bob Kravitz has his makeup done prior to the Pat McAfee Show last night. Too many relevant punch lines to choose just one.

In terms a punter would understand, the first Pat McAfee Show was a towering kick that resulted in a fair catch at the 12 yard line.  There is room for improvement, but for a first effort, pinning the opponent inside their own five was not a realistic goal.

Putting together a show that is supposed to entertain a live audience and look/sound great on radio/TV/internet is a hell of a lot harder than it looks, and in almost all areas the inaugural “Pat McAfee Show” was a success for indystar.com.

The sound is never going to be exactly right without a massive investment in speakers and acoustics.  There are endless site checks where the sound is adjusted, but they are done with an empty house.  What sounded perfect is suddenly muffled and quiet.  That’s the effect of filling the bar with people who can’t help but talk to one another.

That’s life in media because pleasing two masters is not possible.  The show serves two purposes – drive revenue and audience, and what works for one does not work for the other.  The bar that pays for the privilege of hosting the show wants a full and happy house.  Indystar.com wants a unique product that drives use of its website.  Making both happen, well, that’s just not possible.

Last night’s effort at Kilroy’s was pretty good.  For a first effort, it was better than that.  Based upon the areas by which I’ve judged my own events, I’ll grade last the Pat McAfee Show:

McAfee is really good.  He’s energetic, likable, funny and attention deficit disordered just enough to keep the show from lagging.  When the energy in the room started to lag, McAfee felt it immediately and adjusted his behavior to reel the crowd back in.  As for Bob Kravitz, Mike Chappell, and Stephen Holder, there is a reason that Arthur Miller never played Willy Loman himself, and why Shakespeare is not remembered as a great actor.  The Star writers are wonderfully well-informed pundits, but they are not Robin Williams or Bruce Springsteen.  On the radio or TV, they can work because their energy is intimately effective.  To fill a room is difficult, and requires the kind of manic outbursts in which they are just not comfortable engaging.

Performing on the stage requires playing to the back of the house – loud and big is required.  On camera, nuance works.  Marsha Mason is a wonderful stage actress, but on film, she is just overpowering.  All of her gestures are too big, and her voice too loud.  The opposite is true too for the Star writers – too quiet and small for a big room.

This is where radio sometimes falls apart because people working in that purely audio medium are more concerned with the sound than the look.  Looking good is also expensive, and if the Star continues to try to stage more of these events, I would expect the attention to detail in staging to erode.  The lighting was excellent, and the look wasn’t only impressive online, but in-person as well.

Other companies trying this stuff are going to look like crap by comparison.  A table, folding chairs, and a table skirt with a logo are just not going to get it anymore.

This is a generous grade because getting this right is almost impossible.  They wired the sound through to in-house speakers, and when that happens, riding the levels high enough to fill the room will cause feedback – that nasty high-pitched squeal.  Bob and Mike are quiet guys, and Pat is loud, so getting a good mix was beyond the capabilities of the people running that aspect of the show.  The sound was very good online, but catching most of the content in Kilroy’s was impossible for those not seated within 20 feet of the stage.

McAfee is funny and energetic, and these events need lots of energy.  People are used to being entertained, and if the product falls short for two seconds, they move on to the shinier object.  His monologue was self-effacing and brought honest laughs.

Newspapers aren’t in the event planning business, and writers sure aren’t in the performance business, so this had a chance to be awful.  That it wasn’t is a tribute to the preparation that went into the first show, as well as the detail work executed by those behind the scenes.

Minus the audio difficulties, expecting this to be any better than it was would have been crazy, but that doesn’t warrant an A.  I don’t believe I have ever been to an event like this that I would grade an A.  I’ve run a ton of these myself, and would never give any of them an A, so there is nothing wrong with a B.

Indystar.com chief Karen Crotchfelt should be very happy with this B.  I’m a tough grader.

I went for three reasons.  The first of anything is terrifying for those who organized the deal, and the top of that list of elements that scared the hell out of the Indianapolis Star last night was the thought of an empty house.  My wife and I weren’t doing anything, so we put two more people in Kilroy’s than would otherwise have been there.  The second was that I’m a fan of both McAfee and Star columnist Bob Kravitz, and supporting them on a Tuesday was the least I could do.  The third was morbid curiosity – there was no way this thing was going to go off without a hitch.  Print people are not practiced in presenting live events, and the potential for a train wreck was a consideration in deciding to make the drive to Broad Ripple.

The result was actually much better than most radio efforts I have been a part of.  The details were executed well.  The lighting rig was expensive and worth it.  The Star even hired a make-up artist to make the guys extra presentable.  The sound was a little rough, but that’s why radio stations do their shows in studios.  Kilroy’s was not designed with acoustics in mind.

I’ve written it before, and I’ll write it again – Pat McAfee gets it.  He’s one of the few NFL players who understands that his life will continue long after his football career is over.  If he uses his status as a player to build a media brand that can be leveraged after he’s done punting, he will have a revenue source and something productive to wake up and do.