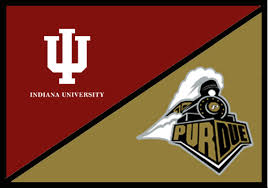 Indiana fans have long looked down their noses at their state university neighbors to the north, and apparently the shoe companies that negotiate apparel deals feel the same way.

The Portland Business Journal recently filed public records requests with every FBS school for their shoe and apparel contracts, and the deal Indiana has will pay the university $850,000 in cash and provide $1,375,000 in equipment,  Purdue will only reap $300K in cash and $1.1M in equipment.

Indiana’s deal is with Adidas while Purdue’s is with Nike.  Nike can reduce the cash outlay to Purdue by 25% if the size of its swoosh is diminished.  At worst, IU will out earn the Boilermakers by nearly 300% in cash, and $275,000 in swag.

Only eight of the Big Ten schools complied in a manner timely enough for inclusion in the Portland Business Journal piece that includes figures from other FBS conferences.

Here are the rankings for the values of those deals for the eight Big Ten schools:

It stands to reason that Michigan and Penn State would be in the Ohio State neighborhood, while Northwestern and Minnesota would be be slumming with Illinois, Iowa, and Purdue.

There can be all kinds of rational debate among students and alums about the relative merits of the individual programs and the collective success of the athletic departments, but cash invested by businesses who take a very hard look at the value of partnerships is a solid metric for assessing value.

As for the potential argument for a wobble due to negotiation excellence by the athletic departments who did the deal, I can say that the ability for the previous Indiana University regime, led by AD Rick Greenspan, was challenged at best.  I was a party to a negotiation that included Greenspan, and let’s just say I would have enjoyed buying a car or house from him.