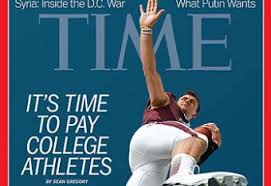 Time magazine’s cover piece this week champions the righteousness of paying student athletes for the value they create for universities.  I’ve long thought that to exclude athletes who fill stadia and arenas from the market economy that benefits virtually every other human being in America, but that Time called for it caused me to re-evaluate.

Now, ESPN’s Dana O’Neil is reporting that the NCAA is going to change transfer rules so that student-athletes can go where they please without coaches blocking their entry to a specific school.

That the NCAA is seriously considering treating the kids like something other than indentured servants while all those around them can profit and travel without restriction provides hope that logic might yet prevail.

The change agents are many.  The most important is a man named Ed O’Bannon.  He played basketball at UCLA 20 years ago, and was pretty damn good, but his lasting legacy will be the lawsuit he filed to challenge the rights of schools to claim licensing rights across the universe in perpetuity.

Even the abrasive adolescent down in College Station, Texas, has unwittingly brought the debate over licensing to the dinner tables and sportstalk radio shows by being accused of accepting a sweaty wad of cash for signing his name 4,400 times.  If anyone believes he signed and signed and signed for free, they are delusional.

What Johnny Manziel did was make lying about a bad rule okay – just as it should be.  The school backed his play for the most part, and the NCAA suspended him for a single half of football game against Rice.  With their complicity, the wrongheaded rule banning athletes from autographing memorabilia for cash died a quiet death.

The rule is still on the books, but after the African American athletes at Ohio State were more severely dealt with, can you imagine the NCAA coming down any harder than they did with Manziel?  No chance.  The only way that rule is ever used to punish another athlete is if the kid rats on himself.

The shift in college athletics has a long way to go before the business model begins to make some sense.  It took baseball almost 100 years to finally eliminate the reserve clause, and the rules that schools use to keep athletes from being the only people involved in major conference college football and men’s basketball not making money hand over fist will wither and die as do all unjust laws.

Unfortunately and ultimately, it will likely be the courts who move schools toward doing the right thing.  After all, the pain of change must be outweighed by the pain of staying the same for change to occur, and only the courts can bring the kind of pain that will cause the NCAA members to allow for the possibility that paying players is the right thing.

The world would be a better place if smart men and women could sit around a conference table and propose doing the right thing only because doing right is the most important thing people can accomplish, but anyone who has ever had a seat at a conference table knows that the people sitting around it are usually not very smart, and that doing the right thing is the last of their priorities.

In the end, the powerful protect their power, and the college administrators will continue to try to hoard theirs, but the evolution toward a fair level of market driven compensation will continue until the waters level.

Moving toward right can be nauseatingly slow and torturous for those whose will is being denied, but as surely as it’s wrong to force 18 year-olds to sign away their rights to compensation for the use of their image, right eventually wins.