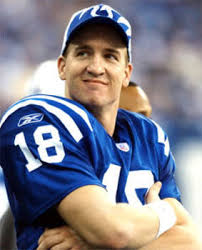 I can’t bring myself to use a photo of Manning in a Broncos jersey.

Last night’s opening night performance by Peyton Manning might have been the best of his career because the previous game featured one of the worst, and Manning knew that better than anyone.

Ironically, the only two postseason games on this list were against the Denver Broncos.  These are in a more or less random order as I enjoyed watching all of these games with relative equanimity.

Choose your poison in 2004, which was the year that Manning served notice that he was becoming one of the all-time greats at quarterback.  At a time when it was rare for a quarterback to achieve a single season QBR of better than 100, Manning shattered the record with an average of 121.1.  If I had to pick a favorite game among the 15 in which Manning played a substantial role, I would circle the game against the Green Bay Packers and Brett Favre at the RCA Dome.  The first half of that game was an incredible shootout between the games two best when both were at the peak of their talents.  Manning was 28-40 for 393 yards and five TDs.  His rating was a pedestrian 140.9.  Favre was 30-44 for 360 yards and four TDs.  Neither through an interception in an offensive explosion that those who watched will never forget.  In the first 10:44 of the game, thirty-five points were scored by the two offenses as the Colts took a 21-14 lead.  All five scores came on long balls of 36, 36, 28, 79, and 34 yards.  There has never been a more exciting start to an NFL game.  It was like watching for very best parts of Arturo Gatti and Mickey Ward’s trifecta of great fights.

Manning was 0-3 in the postseason until he went off in the opening round of the playoffs against Mike Shanahan and the Denver Broncos.  Not only was this one of Manning’s ten best, it’s one of the best shows authored by a quarterback in NFL postseason history.  Manning finished 22 for 26 for 377 yards and five TDs in the 41-10 win.  His passing rating – 158.3, which is perfect.

The stats aren’t that gaudy, but the result was beyond amazing.  With just over five minutes left in this Monday Night Football Classic, the Colts trailed by 21 points.  Many in Indianapolis decided to turn off the TV and get some sleep.  They missed the greatest comeback in Manning’s career.  Down 35-14 after an interception returned for a touchdown, the Colts Brad Pyatt returned the kickoff 90 yards, and the Colts punched it in shortly thereafter.  After recovering an onside kick, Manning went 5-6 for 63 yards during the touchdown drive capped by a 28-yarder to Marvin Harrison.  After forcing a Tampa punt with 1:48 left, Manning went to work on his own 15.  He hit Troy Walters for 12 yards, and Warren Sapp was flagged for roughing the passer.  With 1:28 left, Manning hit Harrison for 52 yards.  In :44, the Colts moved the ball inside the Tampa 10.  Two runs later, the game was tied, and an overtime field goal later, the Colts were boarding a plane back to Indy with a most improbably win in their pocket.

To disprove those who believe that Manning can’t succeed outdoors, Manning completed 18 of his 23 passes for 319 yards and three TDs in the 35-13 win over the Eagles.  His passing rating is a not surprising perfect 158.3.

Last night was outrageous.  Manning may not be flinging the ball with the same velocity, but his reads and precision have allowed him to remain incredible productive in his 15th season.  Manning was 27-42 for for 462 yards and a career best seven TDs and no picks.  The quarterback rating of 141.1 shows a flaw in the rating system.  The guy on the other side of the field being paid like a Manning wasn’t nearly as sharp.  Joe Flacco was 34-62 for 362 with two TDs and two picks.  Manning has never thrown that many passes in a game.

In 2001, Manning went home for the first time to play against the Saints, and maybe he was a little too jacked up because he was very ordinary in a 28-18 loss.  Whatever kept him from thriving that afternoon in the Superdome was addressed before he returned in 2003 as Manning went completely off against the Saints. He completed 20-25 passes for 314 yards and six touchdowns.

One year after getting off the postseason schneid against the Broncos in a game that featured Manning at his absolute best, Manning reminded Denver coach Mike Shanahan how unpleasant playing against him can be as he went 27-33 for 458 yards and four TDs.  His rating of 145.7 reflected a lone interception.  The 2004 season from Manning was one of the finest in the history of the game.

These performances marked the fewest attempts in a game during which Manning played the entire game, and the results were virtually identical.  Manning completed 13-17 in each.  Against the Ravens, he threw for 24p yards and four TDs without a pick, and against the Titans he totaled 187 and 3 TDs without a pick.  Manning’s respective QBRs were 157.5 and 151.2.  The Colts beat the Ravens 44-20 and hammered the Titans 35-3.

If want want to get a bet down early on the next game that might bump one of these out of the top ten, circle the October 20 game in Indianapolis in the building that Manning’s catalogue of work built.  I guarantee you that Manning has it circled.