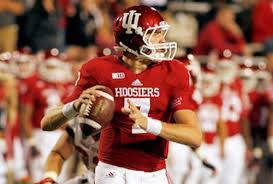 You have to hand it to the Hoosiers.  They have no problem identifying their deficiencies.

The thing they did not say, and will not say is that the Indiana offense is a machine when Nate Sudfeld plays quarterback, and they are not with Tre Roberson.  Sudfeld was 31-42 for 363 yards, four TDS, and one pick.  He also ran for 35 yards, which sadly led IU’s ground attack.  The interception was crucial because Indiana’s defense could not stop Navy’s option offense.

Coaches and players continue to talk like having a couple of quarterbacks is a good thing.  After the offense scored no points on the two possessions Roberson played, Sudfeld moved the offense 63 yards to the Navy 12 before throwing a pick.  After that, Indiana scored a touchdown on every possession.

The Big Ten Network ran a promo featuring Big Ten coaches with the tag line, “Football is complicated.”  It wasn’t for the Navy offense.  They just ran the ball where there were no defenders, or too easily blocked defenders.

There was hope among the IU fans that the days of being beaten by opponents a Big Ten team should throttle were over, but on this night Navy was simply better, tougher, and more disciplined.  Regardless of talent level, winning the battle in those three areas is enough.

One thing Indiana is very good at is admitting when they screw up.  There was no finger pointing, carping about officials, or commiserating about bad breaks.  Indiana got beat, and all those associated with Indiana football admitted they got beat.

You can’t improve without admitting where you are deficient, and IU walks out of Memorial Stadium with a solid understanding of what they can do better next time – and that is show up emotionally at 6p for a 6p kickoff.

Not to give anyone a pass, because this was a bad beat, but the players and coaches are all behaving and talking like a team committed to getting better.  Wilson spoke during his postgame press conference of the team not surrendering, “We had a chance to give up and didn’t.”  That was true tonight, and it might turn out to be true for the season.

The road gets no easier for Indiana as they host the suddenly quite good 2-0 Bowling Green Falcons next Saturday at 12p in Bloomington.