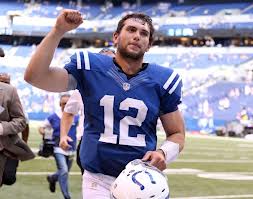 Enjoy every game Andrew Luck plays. As Colts fans found out with Peyton Manning, the end comes before they are ready to say goodbye.

All the Colts who contributed mightily to the Colts opening day win over the woeful Oakland Raiders, please stand up.  If your name isn’t Andrew Luck, Reggie Wayne, or LaRon Landry, sit your asses back down.

The problems with the performance of the Colts were many and profound, but as was the case last season, Luck and Wayne are the NFL’s answer to Compound W – the warts melt away quickly enough to allow the Colts to win games they otherwise shouldn’t.

Colts General Manager Ryan Grigson knew exactly what the score was after last season, and many adjustments were made to the roster to upgrade the areas of gravest concern.  Landry was one important upgrade at safety, and he responded with a gaudy 15 tackles.

We’ll have to watch the tape to see who was responsible for the relentless pressure Luck sometimes dodged and sometimes didn’t.  He was sacked four times by a defense that wasn’t expected to be able to deal with the arsenal of offensive weaponry presented by the Colts.

Luck threw for two touchdowns and ran for the clincher with 5:20 left in the game.  That represented his eighth comeback in just 17 games.  Reggie Wayne was typically excellent with eight catches for 96 yards.

There were several moments where the game’s outcome hung in the balance, and the Colts coaching staff had the good sense to put the ball in the hands of its best two players.  As the Colts tried to put themselves in a position to score with 7:52 left, they faced a third-and-two on their own 42.  Luck dropped, stared a hole in Wayne, and slipped the ball in for a gain of nine.  It was simultaneously simple and elegant, moved the sticks, and showed that while the acquisitions during the offseason were a noble effort to upgrade C players to B players, with the game on the line Luck and Wayne are the guys trusted to execute.

The running game was like the 6 1/2 years Alfonso Soriano spent with the Chicago Cubs.  The ball either flew out of the park – like on Luck’s game-winning scramble from the Oakland 19, Vick Ballard’s first run from scrimmage for 12 yards, or Ahmad Bradshaw’s 13-yarder up the middle on the first drive of the second half (which came on third-and-31.  Or they were strikeouts like on the 12-of-20 rushes that gained three or less yards from its two running backs.

The Colts offensive line will need to protect Luck at a higher level.  After a rookie season that saw the franchise sacked 41 times, the Raiders put the Colts on a pace to yield 64 sacks.

The Raiders went with the very athletic Terrelle Pryor under center because other than his wheels, the offense has nothing to keep defensive coordinators up nights.  Minus Pryor’s improvised 112 yards on 13 carries, the Raiders producers 59 yards on 20 carries.

That would be acceptable if the Colts weren’t schedule to face both Russell Wilson and Colin Kaepernick this season.  If they think Pryor was tough to corral, imagine if Pryor had an accurate arm, a great running back like Frank Gore or Marshawn Lynch, and receivers like Anquan Boldin and Vernon Davis, or Doug Baldwin, Golden Tate, and Sidney Rice.

The Colts escaped today’s game with a win because Luck is quickly becoming special – a player who can be counted upon week-after-week to provide game changing heroics.  Doubters need only watch other respected field generals like Carson Palmer and Sam Bradford to see exactly how unique his gifts are.

His stat line of 18-23 for 178 yards and two TDs isn’t gaudy, but nothing about this 23 year-old is – except the number of wins he piles up wherever he goes.