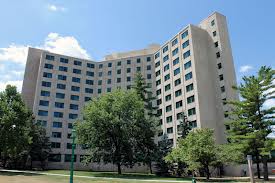 Nothing happened with the Oklahoma State football program I didn’t see plenty of at Briscoe Quad (above) and Jackson Heights Apartments at Indiana University.

College students are indestructible and stupid.  That was true in the 19th century, and Sports Illustrated felt compelled to publish an account about how it was also true with the Oklahoma State University football program in the 2000s.  What the point is, I don’t know.

When I was a freshman at Indiana University in the 1980s, I roomed with a guy from Connersville who did nothing but get stoned.  He dealt speed, hash, and pot, and had a friend who never left our room.  I hated the guy.  He and his girlfriend spent a lot of time having sex in the room, as well as getting high.  I got tired of that noise one weekend, and decided that I was going to eat a pizza in the room I was supposed to be sharing with this idiot, and he told me that he and his girlfriend were “using” the room at that moment.

After telling him that I didn’t give a damn what he was doing – that I was going to eat some pizza and watch TV in my room, he burst into the hallway, grabbed me by my neck and pinned me against the door of the floor resident assistant.  My roommate was a big guy who played basketball in high school, and he appeared to be very serious about kicking my ass, which was strange because I had always heard that pot made people mellow.

I told him, “Go ahead and take your best shot because after you do, the only place you’ll be f***ing Susie is in a jail cell in the Monroe County Jail.”  I also mentioned the likelihood of an attack on his wobbly knees while he slept if he persisted in his rage.  He released me, and within a couple of weeks I moved out because my Dad visited on a typically hazy weekday as “the gang” got stoned as I laid in my loft.

When I was a junior, I moved into a Jackson Heights apartment with a couple of guys I didn’t know before.  Dick and Clint seemed like a couple of decent guys, and things went well for a couple of hours after I moved in until people started showing up at the door at all hours.  I wasn’t sure who these people were who visited for very brief periods of time until I put down my Spanish book and walked into the living room to watch some TV.  On the counter was the kind of small scale used for measuring the weight of very small quantities – in this case white powder.

Yep, I was living with coke dealers.  These were very small time guys who dealt only to support their own habits.  They would buy coke an ounce at a time, take a quarter for themselves and replace it with baking soda.  Other idiots would show up, pay for the now very diluted packages, and go on their way.  They warned me repeatedly when they were high and paranoid that if I went to the cops, I would be charged as well.  As annoying and doltish as these guys were, running to the cops seemed like a cruel idea.  Dick and Clint had enough trouble without the law.  The real play if I had wanted to jam them up would have been to tell their equally vacuous customers that they were paying retail for three parts Arm & Hammer and one part coke.

One night, I awakened to a nude girl in my room.  She was one of the regulars.  My eyes opened and she was staring at me.  Her breasts were oddly shaped, so I rolled over and went back to sleep.  Dick told me the next morning that two coke skanks (his term) joined he and Clint for some coke, cocktails, and poker.  The girl in my room lost repeatedly and accepted a penance of  waking me up while naked.  He thought it was hilarious.  I told him to do business with a higher class of client or keep them the hell out of my room.

It wasn’t terrible luck that led me to drug dealers in Bloomington.  They were everywhere, as they were and are on every campus.  Reporting it as though it should shock anyone presumes that none of us went to college.

That’s a recurring theme in the Sports Illustrated series that tomorrow turns its attention to sex at the Oklahoma State football program.  Yeah, that doesn’t happen anywhere else.  Who would guess that recruits might be enticed to sign a letter of intent by some college “hostess” who enjoys pitching in to create the illusion that football players can find willing girls to “date”?

Tomorrow, I’m sure SI will blow the lid off nookie as they did drugs today.  Pot on campus?  What’s next, keggers?

With each part of the SI series, they grow more tedious, just as my stories of collegiate life at IU do.