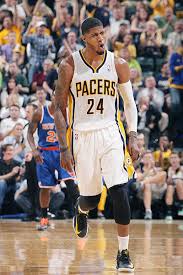 All people have flaws, but Indiana Pacers President Larry Bird’s willingness and ability to tell the truth are not among his.  When players have disappointed Bird, he has spoken out.  When they please him, that is made clear too.  Today, he was very pleased to talk about Paul George.

When Bird drafted Paul George after his sophomore season at Fresno State, Pacers fans wanted two things – a description of George because most had never seen or heard of him, and an explanation of why with good players they had heard of still on the board Bird chose this skinny California kid.

The same thing happened in 1987 when the Pacers took a skinny California kid who was better known as Cheryl’s little brother.  That worked out pretty well, and so has George.  It’s worked so well that owner Herb Simon is going to give George at least $80 million of his money to play basketball at Bankers Life Fieldhouse until June, 2019.

Bird was effusive in his praise of George, saying he’s the “real deal” and that he expects George to blossom into a first team All-NBA player.  George professed his love of Indianapolis in a way that seemed genuine.  He spoke of his new house in Geist and how neighbors are going to great lengths to make him feel welcome.

George is an interesting guy in that he appears to be very concerned with three things and only three things – the Pacers winning a championship, becoming a leader in the community, and winning an MVP award.

Tall, long, earnest, and driven are four damn nice traits to possess for a guy with very serious ambitions about basketball. It’s not hard to see that Bird loves the 23 year-old, and wants him to blossom as a marquee player in the NBA.

As you watch the video highlights of the press conference, remember that today will either be the beginning of something great for Paul George and the Pacers, or the day when all of George’s dreams came true and he stopped pursuing them.

My guess is that George is one of the smart guys who knows that money follows the hard work that drives success.  Money isn’t a goal, it’s a result of the work to reach a goal.  Winning is the reward for hard work, and money is the reward for winning.  Time will tell.