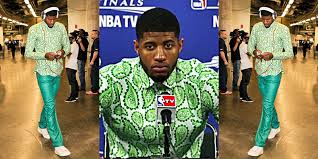 I hope Paul George wears this ensemble at 11a today when his new max deal is announced.

Number 10 was lucky for the Indiana Pacers in 2010.  With the 10th pick of the 2010 NBA Draft, the Pacers drafted a mostly unknown sophomore out of Fresno State named Paul George.

Unimpressed by the consistency that allowed George to score exactly the same number of points (487) in both of his seasons as a Bulldog, the entire city of Indianapolis shrugged its shoulders and yelled “Who?”

There were much better known players available from mega programs – Patrick Patterson and Eric Bledsoe from Kentucky, Xavier Henry and Cole Aldrich from Kansas, and Ed Davis from North Carolina would have to wait as Pacers President Larry Bird the still growing skinny kid with length and a sweet jumper was the best fit.

Indy knows who George is now, and the Pacers will reward the hard work that has helped launch him into the stratosphere of the NBA’s elite.  Reports are the deal will play George a minimum of $80 million over five years beginning with the 2014-2015 season.

Conventional wisdom was that without a top five pick, the Pacers would be doomed to a purgatory of mediocre rosters because getting a franchise player would be impossible.  It’s not bad logic, but Bird rejected it.

The pick immediately prior to George was hometown hero Gordon Hayward of Brownsburg High School and Butler University.  Imagine how different the Pacers fortunes would be had the Jazz seen in George what Bird did, and Hayward had fallen to the #10 pick.  While Hayward is enjoying a productive career, averaging 10.4 points per game over three seasons, George has become a player on the fringe of being mentioned with LeBron, Dwyane, Kobe, and Durant.

George was voted the NBA’s Most Improved Player in 2012-2013, and for good reason.  Sure, he posted career highs of 17.4 points per game, 7.6 boards, and 4.1 assists, but where he makes his indelible mark is on the defensive end of the floor where he led the NBA in defensive win shares (an estimate of the number of wins contributed by a player due to his defense) with 6.3 – almost a full game more than second place Marc Gasol with 5.4.

And as good a player as George is, he might be a better guy.  It’s never surprising when someone in the Pacers front office says good things about a player, but the effusiveness of the Pacers in describing George’s character is telling.  He’s the kind of guy you put on billboards without worrying that he is going to go play shoot ’em up at the Eight Second Saloon like some of his predecessors.

The Pacers roster is taking shape for the long term, with only Danny Granger, Lance Stephenson, and Ron Howard not signed for the next two seasons.

Going into the offseason, the goals for Bird and his staff were to sign David West, rebuild the second unit, and get George locked in for the long haul.  Done, done, and done.

The second unit looks to be a much improved group over that which lost leads built by the starters throughout last season. Luis Scola, C.J. Watson, Chris Copeland, Ian Mahinmi, and either Danny Granger or Lance Stephenson is potentially as good a second unit as there is in the NBA.  Regardless of where they stack up in league rankings, they are going to be stout compared to last season’s uneven group.

The rebuilding really never stops in the NBA, but the heavy lifting of reshaping a roster that began its overhaul in 2006 with retirement of franchise icon Reggie Miller and the deal that sent Ron Artest to Sacramento appears to be over.  Gone are the talented but difficult to manage knuckleheads, and in is a roster that by all accounts is filled with really good guys who aren’t going to embarrass owner Herb Simon or alienate season ticket holders.

There was some thought that George might decide to roll back out to Los Angeles after his initial contract expires, but he isn’t the first guy from Los Angeles to decide that living in Indianapolis isn’t the worst idea during an NBA career that pays him “Beverly Hillbillies” money.  His $80-$90 million will be as tough to spend in central Indiana as Miller’s millions were a decade ago.

If Granger can stay healthy through the season, the Pacers have a chance to be very, very good.  George Hill, Granger/Stephenson, George, David West, and Roy Hibbert are as balanced a starting five as any in the NBA history of the franchise.  They work hard, like each other, and respect the game.

That could make the Pacers a very dangerous team in June.