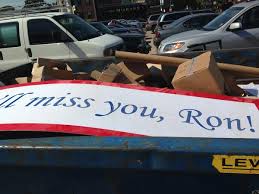 The sign reads, “We’ll miss you, Ron!” Not so much anymore, I guess.

That hypothesis seemed safe until I saw a picture of a Carlos Marmol banner among the Ron Santo stuff in the dumpster.  Minus the useless appendage he calls a right arm, Marmol is alive and in limbo on the Los Angeles Dodgers 40-man roster.

That some intern was tasked with cleaning out a storage unit is not a surprise.  That the person who monitors the interns likely told the kid to empty it to the walls isn’t surprising either.  The only surprising part of this is that the swag was tossed in the trash instead of placed on eBay for auction.

A front office willing to turn the outfield of a baseball shrine into a drive-in movie theater for a couple of hundred bucks certainly would see value in some of that stuff.  Maybe they are a little thin-skinned over earning a rep for profit mongering, what with some of the highest average ticket prices while hiring triple-A level talent.

They were obviously too callous to call Jeff Santo to gauge the family’s interest in the card, and never gave any thought about auctioning it with the proceeds going to JDRF – Santo’s charity of choice.  Attention to detail is at the root of many of the Cubs issues, including the field not being of adequate length to safely host the Northwestern vs. Illinois game in 2010 before doing the deal to move the game to the Friendly Confines.  The game was played using only one of the end zones.  (The Cubs recently entered into another deal, but are sure that renovations allowing the removal of dugouts will allow the games to be played in both directions.  Hurray!)

Crane Kenney, the genius behind the football debacle and Cubs president of business operations, called Jeff Santo personally to apologize, and that might be the most meaningful contribution to the organization he has ever made.  If I ever have the time to put together a post highlighting people who have done the most harm to a franchise this has suffered more than any other in its 137 years, Kenney will be in the top three.

The Cubs violated the first rule of business – don’t let an accountant or lawyer into the room as plans are being debated.  With lawyers, their feedback is always through the prism of liability, and accountants only see financial risk but enjoy pretending they know something about the business and people.  And NEVER put an accountant in charge.  Kenney is an attorney who acts like an accountant.  Bang and bang.

If someone running the business side had an ounce of empathy, they would make sure that part of the Cubs front office understood that baseball is a people business, and that bean counters are best kept out of people management.

To make matters worse, Cubs spokesman Julian Green lied about the team retrieving the memorabilia when the truth was that Beth Murphy (of the Murphy’s Right Field Bleachers Murphys) had rescued it after seeing it in the dumpster while walking her dog.  She plans to give it to Santo this weekend.  In the end, the right thing was done through no effort from the Cubs.  This mirrors the fan experience at Wrigley.  People are still able to have fun there, but other than cleaner bathrooms and fancier sandwiches, it has nothing to do with the Cubs – on the field or off.

Of course, this was an innocent mistake – as most mistakes are.  It was not the intention of the Cubs to piss off Cubs fans who continue to revere Santo.  That’s the problem.  Organizations never try to lose, anger, offend, or disenfranchise.  Some just can’t help it.