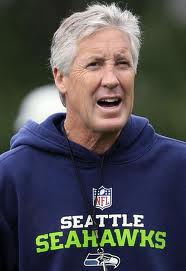 Pete Carroll hung an L where there could have been a W today in Indianapolis.

The Colts did a lot of good things in the second half of today’s 34-28 come from behind win against the previously undefeated Seattle Seahawks, but that game was lost by the complications Seahawks coach Pete Carroll introduced to the game.

It wasn’t the timeouts used because of staffing issues that caused the Seahawks to use all three second half stoppages with 8:55 left in the game, although that didn’t help.  It was more about rendering moot the one offensive force the Colts appeared unable to stop.

Marshawn Lynch was a rampaging beast today at Lucas Oil Stadium.  The Colts had trouble bringing him down almost every time he touched the ball.  Lynch ran 17 times for 102 yards – an average of six yards per carry.  There were some carries that really didn’t do much (-5, -2, no gain), but more often than not Lynch churned and rammed his way to positive yards.  A six-yard average requires more than 17 carries regardless of adjustments made.

And defensively, the Seahawks had difficulty defending whomever the Colts lined up in the slot.  Reggie Wayne was very productive in the second half.  Normally, halftime adjustments are overrated as determining factors in the outcome of the game, but Colts offensive coordinator Pep Hamilton clustered Wayne, T.Y. Hilton, and Darrius Heyward-Bey which required the Seahawks to assign Walter Thurmond on someone.  The Seahawks chose Wayne, and the result was the hall of famer schooling the four-year veteran out of Oregon.

Wayne ended the day with six catches for 65 yards, but it was his five catches in the second half including some great box out work to clear space for a completed two-point conversion attempt giving the Colts a 31-28 lead that made the Seahawks and Carroll pay.

The battle between the two outstanding second-year quarterbacks was incredibly even.  At one point in the fourth quarter both Colts QB Andrew Luck and the Seahawks Russell Wilson were 15-27 for 210 yards and two TDs.  In the end, Luck had the edge in throwing, but Wilson was elusive to say the least as he tied Lynch as the leading rusher for the Seahawks with 102 yards on 13 carries.

It’s not easy to lose a game when your team runs for 218 yards on 34 carries, but that’s exactly what Carroll did.

There was a phrase painted on the wall of the Indiana University Basketball team’s locker room that might still be there.  It read “Don’t complicate winning.”  Despite the clunky wording of the message (it’s much clearer to tell people to “win simple” than to champion the aversion of complexities while aiming for victory), it would have done Carroll some good today.  If you are running the ball at 6.4 yards per carry, run the ball.  If Reggie Wayne is lined up in the slot, put a cornerback on him who won’t be abused repeatedly.

While Heyward-Bey and Hilton are nice players (Hilton had a big day with five catches, 140 yards, and two TDs today on only six targets), there is one Canton bound talent among the Colts receiving crew, and putting your third best corner on him is going to cause you problems.

Add the timeout fiasco to the equation and the noise being made in Seattle about the safety call that was upheld under review and a borderline pass interference that wasn’t called late should be directed toward Carroll who has long shown a disdain for details.  He’s plenty enthusiastic, but his use of strategy and time maintenance has always been suspect.

The Colts also won today because they were tougher late in the game.  The 10-yard run by Trent Richardson when the Colts faced a third and five with under 4:00 minutes left in the game was huge and the result of low and tough running.  Richardson ran for only 56 yards on 18 carries, but that run was a major nail in the Seahawks coffin.

So the Colts are alone in first place in the AFC South with a 4-1 record, and the Seahawks will end the week on top of the NFC West regardless of what the 49ers and Cardinals do.

The Colts are prime time players the next two weeks with games at San Diego and at Lucas Oil Stadium against Peyton Manning and the Denver Broncos.  A split would leave them 5-2 with the toughest part of the schedule behind them.

Avoiding ways to lose is a good step toward consistently winning, and the Colts did that today while Carroll’s Seahawks did not.