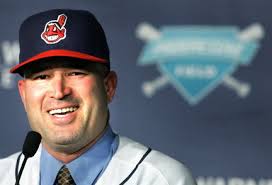 This picture was snapped when Manny Acta was named manager of the Cleveland Indians and he still knew how to smile. If three years of losing in Cleveland didn’t paralyze his face into a frown, one season in Chicago will finish the job.

Anyone surprised that Joe Girardi decided to stick with the New York Yankees is a moron.  The only hope the Cubs of had of landing the only decent manager with any interest in the job had was that the Yankees would be so dissatisfied with an 85-win season that they might tell Girardi to clean out his desk.

The Yankees don’t lose managers unless they want to, so when general manager Brian Cashman said that they would offer Girardi an extension it was like Mariano Rivera had been summoned from the bullpen.  The Cubs were dead – they just didn’t know it.

What possible reason could Girardi have had for moving his family to Chicago from New York.  I didn’t use a question mark at the end of that question because it isn’t really a question, but a plea for a legitimate rationale for doing anything other than what Girardi did.

And don’t tell me that Girardi and his wife are from the Chicagoland area.  If you live other than where you grew up, would you move to a lesser company out of geographic nostalgia?

The Yankees have won 27 World Championships since the Cubs won their last, and despite signing the offensive juggernaut that is Ryan Sweeney to a two-year extension yesterday, the commitment the Cubs have shown to losing big should deter most conscious candidates.

Girardi wasn’t just conscious; he’s very capable.  After watching Dale Sveum get rewarded with a pink slip for enduring his team being traded out from under him during both the Julys he served as skipper, reasonable people would choose to toil as a third base coach for a legitimate franchise than manage the Cubs.

Sveum was fired by Cubs President Theo Epstein for being unable to develop the young talent on the Cubs roster, but a serious consideration in the regression of Starlin Castro and Anthony Rizzo must be the way that Epstein and the front office have decided to toss seasons in the trash in the middle of July.

When the front office deals every valuable cog in a mediocre machine, the remainders aren’t likely to work quite as hard.  There is no doubt the Cubs farm system was gutted by the idiocy of Jim Hendry’s win-now initiative combined with brutal drafts, and the farm system had to be rebuilt, but to expect young men in their early 20s to take seriously their daily preparation when management had done everything but paid a biplane to fly over Wrigley Field with a banner that reads, “We don’t care whether we win until 2016!” shows no knowledge of human behavior.

So Girardi will do a great job at Yankee Stadium for another four-years while the Cubs will almost certainly conclude the current search and another in that time.

There are rumors that Manny Acta is a finalist for the Cubs gig, and let’s just say that his record will not warm the cockles of season ticket holders deciding whether to re-up for 2014.

Acta may or may not be a genius in developing youngsters to win down the road, but he owns a career 372-518 mark in six seasons managing the Washington Nationals and Cleveland Indians. In four of five full seasons (one of which was actually 156 of 162 games with the Indians, but he had already lost 91 games so we’ll count it as full), Acta’s teams lost at least 89 games.  In the other, the Indians found a way to finish 80-82.  The sixth (partial) season was a trainwreck for the Nats where Acta coaxed a 26-61 record while his replacement – the all-to-well-known-on-the-north-side-of-Chicago – Jim Riggleman did something right to go 33-42.

A.J. Hinch are Rick Renteria are the two other serious candidates.  Both are currently employed by the San Diego Padres, for whom Cubs GM Jed Hoyer was the boss until agreeing to begin the rigorous work of disemboweling the Cubs.

Renteria would be a first time manager, and Hinch would be getting a second bite at the apple after spending parts of two seasons with the Diamondbacks where he ammassed an 89-123 record. These two along with Acta would be the types of men attracted to the Cubs job.  Acta and Hinch are terrified that after two massive failures he will never be trusted to manage at the major league level again, and Renteria is a first-timer who would be thrilled to manage anywhere.  Sveum’s fate will not deter any of the three as managing the Cubs is the best job any of them could hope for.

That they are almost certain to last only the next two years in Chicago is just fine by them.  The cash earned by telling Castro to watch the game instead of the Red Line as it passes will put their kids through college.

If fans want to know where the Cubs stand, all they need to do is read the resume’ of the clod who accepts the offer to manage.  If it looks more like the career work of someone who should be hired to run the AAA team in Iowa, that’s because it is.