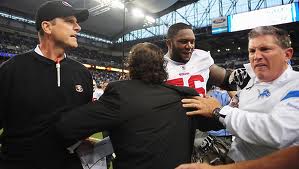 If Jim Harbaugh and Jim Schwartz can’t get along, how can a reasonable person expect high school kids to congratulate each other with grace.

Asking high school kids to calmly shake hands seconds after a hotly contested game is an unrealistic request.  It has always been ridiculous, and those who mandate that it occurs lack an elementary understanding of the way a competitive teenager’s brain functions.

The Kentucky High School Athletic Association took a step in the right direction by issuing a directive yesterday that requests an end to the foolish tradition that has led to more than two dozen violent incidents in the last three years in Kentucky alone at the end of games at high school games.

The sad truth is that forcing teenagers to congratulate each other moments after a game is a threat to the safety of the competitors, and no one means “Good game!” when they say it.

It would be great if kids (or adults for that matter) enjoyed the healthy perspective that a game is just a game, but most aren’t wired that way.  There is no on/off switch for competitiveness, and asking someone to congratulate his counterpart mere seconds after trying to beat the hell out of the same guy is absurd.

Of course, someone is going to take a swing.  Anyone who played sports has seen it up close.  At Trinity High School in Louisville, a teammate of mine was sucker punched after a soccer game.  My regret is that there wasn’t a brawl.  We should have beaten the hell out of the kid who punched Bryan Woodard.  My anger is still there 30 years later.  If not for the handshake line, it never would have happened.

Almost 10 years ago, during postgame handshakes immediately after a Cathedral vs. Arlington basketball game, an Arlington player sucker punched Cathedral guard Tyke Cockerham.  There was chaos that night.  My son was in the middle of it because his coach asked him to get the Cathedral kids out of the mob.  Watching my skinny freshman son sprint into the fracas made me proud.  Back up your guys.  If you absorb some punishment, dish out twice as much.

That’s a terrible way to think in the office, classroom, or behind the wheel of a car, but when competing men are encouraged to indulge that mode that proves so valuable during battle, asking them to hang a behavioral u-turn is not reasonable.  The adrenaline rush during physical struggle is a genetic component that has been nurtured and rewarded since man stood erect, and those who have done it best have survived.  Those who wanted to shake hands after war were stabbed, shot, and/or pummeled.

Waiting until that frenzied state calms before forcing kids to congratulate each other is a wise step in the right direction.

These fights happen all the time and always have.  Getting rid of the postgame handshake is a big step toward their elimination.

Of course, state legislators in Kentucky are furious, but that’s par for the course.  The only unique skill possessed by elected officials is making noise that panders to constituents in the face of evidence to the contrary.

Heritage Christian High School in Indianapolis is the only school I know of that has ever gotten it right.  I don’t believe this happens anymore, but when my son played basketball against Heritage, the players and coaches from the opposing team were invited for a postgame meal.  This was after showers and a chance to calm down a bit.

NFL Players gather in the middle of the field after every game to pray together.  There is no mandate, and those who have no interest in that scene head to the locker room.  Nothing wrong with doing either.  The coaches seem to have some difficulty getting along as they shake hands in many cases, and they are grown men.

This order from the KHSAA smacks of liability aversion – a family of a kid who fractures a cheekbone in a fight is going to sue somebody, and if the KHSAA mandates or encourages the act that precipitates the fight, it stands to reason it would be a likely party in that suit.  Even if the KHSAA acted only as a preemptive act to avoid a future judgement, the result is just, so what the hell.

If you want sportsmanship after high school athletic events, give the kids a few seconds to get their pulse under 180.  That way they aren’t in harm’s way, no one gets hit, and then no one is sued.