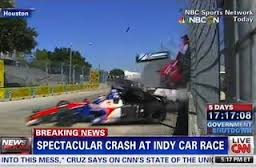 Crashes like Dario Franchiti’s in Houston are going to happen, but the piece that was cleared by the Associated Press cannot.

The Associated Press is really good at providing dry game recaps, and other nondescript pieces that help newspapers fill its pages with relevance.  What it rarely does is rage against a player, team, or league – until what happened at IndyCar’s Grand Prix of Houston got wedged between the APs Jenna Fryer’s hindquarters and her saddle.

President Lyndon Johnson famously said about the media and the Vietnam War, “If I’ve lost Cronkite, I’ve lost Middle America.”  Well, if you lose the Associated Press, you have lost media coverage.

IndyCar has lost the media.  Here is part of what the Fryer wrote and AP distributed (for the whole piece, click here):

Far be it for the beleaguered series to draw any interest for something other than a crash that injured 13 fans, an IndyCar official and left the three-time Indianapolis 500 winner hospitalized with a fractured spine and broken ankle.

The accident was replayed on television stations across the country and even made a morning show or two on Monday. It came with a hitch, though: At least one network mistakenly referred to IndyCar as NASCAR, and instead of recognizing Franchitti for his impressive racing resume, more than a few chose to identify him as the ex-husband of actress Ashley Judd.

Almost a year after the Hulman & Co. board of directors ousted CEO Randy Bernard, little progress has been made with IndyCar. In fact, some might argue the series has taken a step or two backward.

The board elevated member Mark Miles in late November to CEO of Hulman & Co., but not much has been accomplished so far under his watch beyond the recently announced road course race at Indianapolis Motor Speedway.

Conversely, the race at Baltimore is falling off the schedule after three years, there appears to be questions about the future of the event in Brazil and the 2014 schedule has yet to be released. Series sponsor Izod is leaving at the end of the season, and Miles has yet to fill the role of head of IndyCar and IMS’ commercial division — the person who would likely be trying to replace Izod.

Miles has been turned down at least once for the job — by motorsports marketing executive Zak Brown — and former Ganassi executive Tom Garfinkel chose president and chief executive officer of the Miami Dolphins over any serious conversations with IndyCar.

It’s going to be a tough position for Miles to fill because of the current structure.

It makes anyone paying attention, including the media watchdog who forwarded me the piece, wonder who the hell is in charge of crafting the message of IndyCar.  In Indianapolis, the series is an afterthought, and nationally it is invisible.  The only month it matters is during May, and the rest of the time, fans just hope nothing embarrassing happens – as it did in Houston.

Click here for the best in family dental care in Indianapolis

This kind of publicity is a disaster for IndyCar because there is no counter piece to show the positive – if there was any.  The closest thing to positive coverage comes from Curt Cavin of the Indianapolis Star, who is becoming lonelier by the day as an impartial voice for the series.

What’s missing is not excitement, better equipment, or more good drivers.  I would have liked to see the flying wing chassis selected a couple of years ago when IndyCar went with the more conservative Dallara, but that aside, IndyCar needs three things – attention to details (both on and off the track) by those committed to the success of the series, leadership that knows how to throw a party (Mark Miles is that guy), and an evangelist that will work tirelessly to spread its message.

A piece like Fryer’s cannot happen for IndyCar to survive.  Number one, everything she wrote is true.  Number two, if she was presented with angles that might have painted IndyCar in a more positive light, she was not compelled to use them.  Maybe Fryer is inflexible in her desire to roast IndyCar.  Maybe IndyCar’s effort in Houston was so completely bereft of planning and common sense that it would have been impossible to live through the weekend and write anything but what she posted.

Maybe the spin from IndyCar PR is right on, and Fryer is an outlier.  Maybe not.  Maybe a compelling storyteller could turn the media coverage into something that sell sell rather than destroy the series.

I don’t know everyone in public relations, but I worked with exactly the type of person who could make a huge difference.  Eddie White is the template for the position IndyCar needs to create.  He’s dogged, creative, and a zealot, and IndyCar needs lots of all three of those attributes.