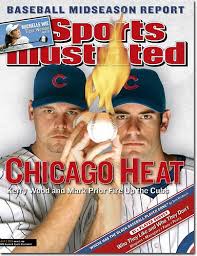 If there was ever a Sports Illustrated jinx, the 2003 Cubs were it.

On a Saturday night 10 years ago, I had a party.  A houseful of people watched the Chicago Cubs throttle the Florida Marlins 8-3 at Pro Player Stadium to inch within one game of their first trip to the World Series in 58 years.

When Jeff Conine grounded out to short against Kyle Farnsworth to end the game, the Cubs took a 3-1 series lead, and with two of the three remaining games at Wrigley Field with Mark Prior and Kerry Wood scheduled to start, how could they lose?

So we celebrated.  Every fiber of my being knew it was wrong, but having the opportunity to jump the gun with a bunch of friends was too inviting.

The last time I celebrated prematurely was in 1984 during a Game Four that for all the world looked like a Cubs clinching win, and then Steve Garvey ruined that night with an arrogant vengeance.

There is a weird dynamic among Cubs fans where they try to ignore the past and behave like normal human beings despite knowing that it causes karmic mayhem.  That conscious ignorance is a part of the problem with the Cubs.

My decision to celebrate as though the Cubs had won the series had no effect on the team during the next three losses, but the team’s inability to forget that they play for the Cubs and not question their behavior definitely made winning more difficult.

Sports fans get tired of hearing about the tales of woe Cubs fans’ experiences, and rightly so.  It’s nauseating to hear again and again about where a Cubs fan was when he learned that hope is for morons, but I’m telling you that when the broadcaster whose name will not be mentioned here barked, “Five outs to go!” during the top of the eighth the following Tuesday, I screamed at the TV.  Counting outs courts disaster, and while no Cub heard him, I’m sure many thought the same thing, “Only five more outs, and we go to the World Series.”

No better way to lose than by counting outs instead of focusing on the task at hand.

Click here to meet the best dentist in Indiana

Since Game Four of the 2003 NLCS, the Cubs have lost nine consecutive postseason games.  Such is the price of premature celebration.

The Cubs are a complete roster makeover away from a return to the playoffs for another bite at that apple.  They recently ended the worst three year run in the history of the franchise, and have never been farther from success.

Ten years ago, with Prior, Wood, Zambrano, and Clement, it appeared that the Cubs were entering an era filled with playoff wins, and maybe even the elusive first World Championship since 1908.

If Cubs fans have learned a life lesson from their experience, it’s to not take for granted what appears to be sure.

Baseball is a strange game, and the Cubs have proven that again and again and again.  Before 2003, Cubs fans were already the most emotionally abused group of sports fans the world had ever known, but that mess cemented in their minds a destiny of never experiencing the joy of ultimate victory.

It’s not tragic because the victories and defeats for a baseball team simply don’t rise to that level of importance.  A child’s death is tragic; the misery of a baseball team barely rises to unfortunate.

Who knew that 10 years ago, this current mess would be what the Cubs would become.  Sifting through the resume’s of managers who would consider taking the job, claiming victory by signing 16 year-olds from the Dominican Republic who might contribute in another five years at the earliest, and an owner lying his ass off to  gin up support for the remodeling of Wrigley Field.

Not only are there no Cubs left from the 2003 Cubs; there is only one left from the 2008 team – the last to qualify for the postseason.  Jeff Samarzdija is the lone holdout from the final successful Cubs team.

Whether the Cubs ever return to the playoffs depends upon Theo Epstein’s ability to cobble together an organization that can compete with the St. Louis Cardinals, Los Angeles Dodgers, and upstart Pittsburgh Pirates.  And betting a tall stack on that looks more and more like a fool’s errand.

Despite the fun of debating who the next manager will be, the Cubs are likely two managerial hires at the minimum from contending.  Whomever this manager is, he will be gassed by the end of the 2015 season, and the beat will go on.

So close 10 years ago.  So close.  I’ll celebrate the same way next time.  If Cubs fans wait for a World Championship to pop the cork on their joy, it might rest on the shelf for another century.