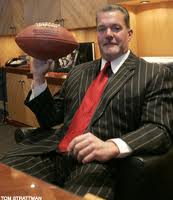 There is a challenge inherent in listening to or reading comments made by Colts owner Jim Irsay.  He can make the mistake of assuming everyone knows what he’s talking about.  That’s one of the consequences of being an owner – no one stops you to get clarification for the fear of insulting him.

Irsay gets a lot of “Yes sirs!” in his life as a guy who owns and runs a business valued at $1.2 billion (according to Forbes), and so he tends to tell the media things in a vague and circular way that allows for people to misconstrue both intent and meaning.  Such was the case with Irsay’s comments to the USA Today yesterday that continue to draw so much attention on ESPN.

Here’s what he said:

“We’ve changed our model a little bit, because we wanted more than one of these,” Irsay says, flicking up his right hand to show his Super Bowl XLI championship ring.

“(Tom) Brady never had consistent numbers, but he has three of these,” Irsay adds. “Pittsburgh had two, the Giants had two, Baltimore had two and we had one. That leaves you frustrated.

“You make the playoffs 11 times, and you’re out in the first round seven out of 11 times. You love to have the Star Wars numbers from Peyton and Marvin (Harrison) and Reggie (Wayne). Mostly, you love this.” Irsay points again to his ring.

That’s what Broncos coach Jon Fox referred to a “cheap shot.”  The media tends to share the quote that can be inferred to contain inflammatory rhetoric, while omitting the stuff that gives the quote context.

Here’s the part of what Irsay shared that makes clear the meaning of the above comment:

“I think it’s perfect,” Irsay says. “What’s happened is what Peyton and I hoped would happen. The desire was for him to get well and get to a team that has a chance to win another Super Bowl before his career ended. And our desire was to be able to transition to Andrew. To be so good so soon is stunning.”

And there was this clarification, “Circumstances created this decision,” Irsay says. “You have to understand there’s no way this occurs if he’s in Indy. It’s just impossible, where our salary cap was. Having him stay at the type of number that he expected and deserved to earn and all those things.”

Manning’s cap number in Denver is $17.5 million, while Luck’s is just over $5 million.  That difference allowed the Colts to build a defense that until the Chargers game had been pretty good at stopping teams.

Every Colts fan knows that the regular season record for the Colts was an incredible 138-54 from 1999-2010 with 11 trips to the playoffs.  Some incorrectly assign blame for the team’s 9-10 playoff record during those years to Manning, and many are inferring the same thing from Irsay’s comments.

The truth is that Manning’s only culpability for those losses was in counting too much against the salary cap for the Colts to address the needs of the defense.  Irsay knows that better than anyone.  Sure, there were games that saw a less than perfect Manning in the postseason, like the four pick day he struggled through in the 2003 AFC Championship, but he also had a quarterback rating of over 90 in four of the 10 losses.

While comparisons between Manning and Andrew Luck will be a very popular sidebar this week, and just as in the evaluation of Irsay’s comments, it’s imperative to factor the salary cap picture into the equation.

Irsay and general manager Ryan Grigson didn’t have the luxury of viewing Manning and Luck in the vacuum of how they would compare as quarterbacks in 2012 and 2013 in making the decision to release Manning.  They needed to be circumspect, and that is how the media should interpret Irsay’s comments.

Being logical makes the quotes and story less inflammatory, but to do anything less is unfair to the Colts and Irsay.