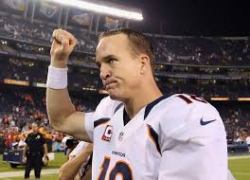 On Sunday night, the Denver Broncos and Indianapolis Colts will actually play some football.  The hyperbole and weirdness of this strange week will be over, and football skills will finally trump verbal clumsiness Bill Polian/Jim Irsay) or brilliance (Peyton Manning/Andrew Luck).

There will be those who say that the toughest part of Manning’s night will be in finding the visitors locker room at Lucas Oil Stadium, and they are likely right.

If the Colts couldn’t get past a very mediocre offensive line to rattle Phillip Rivers Monday Night in San Diego, how in the hell are they going to knock Manning around?

When trying to figure out how to attack the Denver offense, which is Manning and his toys, there are some unfortunate facts to consider:

As much as football is normally an 11 on 11 game requiring a minimum level of competence at all 11 spots for an offense or defense to flourish, the truth about the Broncos is that as long as Manning is upright, their opponent is at an enormous disadvantage.

On defense, the Colts will try to confuse Manning, as does everyone.  Few succeed.

On offense, the Colts need to score on at least 50% of their possessions because Manning is likely to.

Here are the five keys to the Colts winning on Sunday night:

Manning shows up to Lucas Oil Stadium in a state of emotional upheaval.  Colts fans know that Manning’s record in the postseason is a very mediocre 9-11.  That’s pertially because as Manning has chosen to win games with his arm in the regular season, he his deferred to the defense in the playoffs.  Third-and-two late in a playoff game, Manning is likely to call a running play, avoid a potential turnover, and put the game in his defense’s hands.  Colts fans need to hope that the massive amount of attention leading up to this game tricks Manning’s psyche into believing this game in being played in the middle of January, and Knowshon Moreno gets a bunch of big third down carries.

Colts receivers are over their case of the yips.  In the last two games, Colts receivers have dropped eight of Luck’s passes.  Through the first four, they dropped four.  The Colts can’t afford to execute plays well in every other facet, and then drop accurate passes.

Play mistake free football.  The Colts have been penalized for less yards than any other team in the NFL (175).  Denver has been dinged for almost twice that yardage.  Denver is even steven in turnovers, and the Colts are +5.  The Colts must make the Broncos earn every yard, first down, and point.  If they could force a couple of turnovers, that would be a big help (as you would guess).

Do not blitz – EVER.  While Manning has put up very good numbers when not blitzed 141-189 for 1,690 yards, 14 TDs, two picks, and five sacks.  When blitzed, he’s 37-51 for 489 yards, eight TDs, and no sacks or picks.  The biggest number is TD percentage.  When not blitzed, Manning completes 7.4% of his passes for touchdowns.  When defenses blitz, the number more than doubles to 15.7%.  His quarterback rating when blitzed is a crazy 142.1.  When not blitzed, it drops to an only excellent 121.8.  As fans saw in Indianapolis for 13 years, blitzing Manning is the strategic equivalent to hitting a 17 in blackjack.

The Colts could put Reggie Wayne at cornerback, and hope that out of habit Manning throws it to a favorite all-time target, but other than that, Manning is virtually impossible to stop, and the Colts offense hasn’t exactly been a juggernaut that looks ready to engage in a shootout.

I’m usually not a big proponent of the crowd’s effect on a game, but this week, I think an rowdy and loud crowd could be disruptive.  The only way to beat Manning is to make him focus on something else, and deafening noise and virulent invective might help.  Cheering him is certainly appropriate before the game, but as soon as kickoff comes, fans need to cease the aid and comfort of #18.