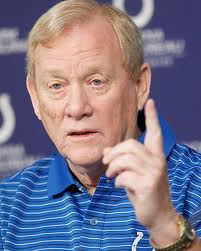 Yes, Bill Polian is the #1GM in the history of the NFL, and he should be honored by the Colts.

Bill Polian ran the Colts, and they went to the playoffs 11 times in 14 years, traveled to Miami twice for two Super Bowls, and won one.  He was a genius at building a roster behind the NFL’s best quarterback, and when the winning stopped, he was a goner – just like everyone else who loses.

At some point soon, the Colts should honor Polian with a place in the Ring of Honor because he did what he was paid to do as well as anyone in the history of the game.  Sure, he could be a petulant jerk, storming around the Colts Complex on 56th Street yelling and screaming at everyone over petty nonsense.  But Polian wasn’t hired to teach charm school.  He was brought to Indianapolis because when it came to assembling a roster, he was the best.

The Buffalo Bills team he built played in four straight Super Bowls, and when Polian’s act became stale, he was dispatched.  You think the Bills would welcome a return to the success they enjoyed under Polian?  Hello to the Carolina Panthers, who under Polian went to the NFC Championship in their second year of existence.  He turned the Colts around just as quickly, with a 13-3 record in his second year.

That he wasn’t a cuddly fellow who dressed up as Santa and wore Hawaiian shirts every Friday is not at issue.  He built a championship quality team in record time through drafting to a specific model that allowed the Colts to draft and hold on to the best quarterback in NFL history.

The drafts that Polian used to re-stock the defensive secondary, both lines, and linebacker corps dried up after 2006.  The Midas touch abandoned him, and the Colts talent eroded.

He was sent packing without a lot of fanfare, as is usually the case when the prickly get canned.

Now, Polian shares his considerable wisdom on ESPN, and this week has provided some entertainment by expressing his cold dissatisfaction with Colts owner Jim Irsay’s appraisal of Polian’s “model.”  It’s one thing to get the ax.  It’s quite another to be insulted in the national media by a guy who inherited an NFL franchise.

In Polian’s mind, the smartest thing Irsay ever did was hire him, so the respect needed to accept criticism after the cessation of compensation was never there.  It can suck being an owner.  Everyone is nice because of what you can give them, not because of who you are.  Polian listened to Irsay because he had to listen, and Irsay was smart enough to know that his input was never needed.  On the flip side, Irsay has the free and clear ownership of an NFL franchise worth $1.2 billion.

For over a decade, Polian worked tirelessly to build a team that could contend for a championship, and not many have done that better.  Halas, Lombardi, Walsh, and Belichick are in the conversation, but for the period of 1999-2010, the Colts were the best regular season franchise in the history of the game.  That counts for something.

Polian committed two fatal errors – his drafts were mediocre at best from 2007-2011, and he engineered the tanking of the undefeated season.  When Curtis Painter ran on to the field in the middle of the third quarter against the New York Jets on December 27, 2009, instead of Peyton Manning, Polian lost the players, ownership, and fans.

Right or wrong, Polian is blamed as the architect of the surrender, and that will forever taint an incredible legacy in Indianapolis.  Regardless of the drafts from 2007 forward, the white flag in Lucas Oil Stadium vs. the Jets, and the erratic temper that he showed, Polian was an outstanding architect, and deserves to be honored.

I’m afraid that like Bob Knight refusing to return to Assembly Hall, Polian would refuse to show for his ceremony.