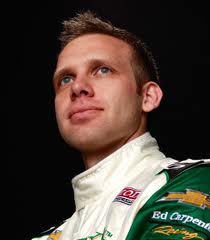 Pull up a chair, pour some Fuzzy’s Vodka over ice, and check out Ed Carpenter try to repeat his 2012 win in the MAVTV 500 on NBC Sports at 8:30 tonight.

IndyCar will call it a season tonight at Fontana, and the driver of the Fuzzy’s Vodka #20 Chevy is going to try to finish it tonight just as he did a year ago – with his only win of the season.

Next year will see the implementation of a more logical schedule that will avoid a five-week hiatus and conclude at Fontana with a Labor Day weekend race.

There has been a lot of issues that defied logic over the years in IndyCar, but the schedule that totally annihilated momentum as the season came to an end might have been the most damaging.

From the Grand Prix of Baltimore on September 1 until the The Shell and Pennzoil Grand Prix of Houston on October 5, IndyCar was dark.  That’s being corrected which shows that Hulman CEO Mark Miles can see and correct obvious problems.  That should give fans some hope.

Another reason for hope are drivers like Carpenter who isn’t just a great oval racer, but a hell of a good guy.  He took some time this morning on 1070 the Fan to talk to Fox 59 sports director Chris Hagan and me about the race and the series.