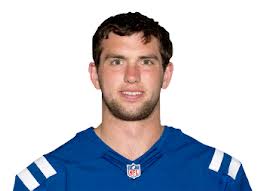 Andrew Luck was the better quarterback tonight, but the season is long, and the Broncos and Colts might not be finished with each other for 2013.

Tonight, Colts fans hoped they would be able to salute their hero, and watch the Colts pull the upset in a game that lived up to the hype.  Check and check.

Ill-timed Broncos turnovers and penalties doomed the previously undefeated Broncos to their first defeat.  The 39-33 score doesn’t tell the story of this game.

The Colts played with urgency throughout the game, and the malaise that seemed to define them last week in San Diego was not repeated.  The defense was stout, and the offense was productive.

While the discussion all week centered on Peyton Manning’s return to the stadium his 13 years of work as quarterback provided, and whether owner Jim Irsay made the right call by releasing the guy who should be the the first statue outside Lucas Oil Stadium.

Tonight, the two had very similar passing stats until Manning became very pass happy late in the fourth quarter as he tried to rally the Broncos to a come from behind win.  Luck finished 21-38 for 228 and three TDs, while Manning was 29-49 for 386 yards, three TDs and one huge interception.  Luck squeaked by Manning with a quarterback rating advantage of 99.5 to 96.1.

There were other guys who were huge for the Colts:

The Colts ran for 121 yards, but 29 came on four Luck scrambles, and another 30 were on a Darrius Heyward-Bey reverse.  Trent Richardson, Donald Brown, and Stanley Havili combined for 62 yards on 26 rushes.  And they still scored 39 points.

All that hard hitting took a toll as Samson Satele, Reggie Wayne, Greg Toler, and Josh Gordy left the game, and others missed plays as they recovered from minor dings.

Wayne’s injury is especially troubling.  There was no contact when his knee gave way.  He put weight on it as he left the field, so there is reason for hope that the steadiest force on the Colts can continue his consecutive game streak.  It hit 189 tonight, and the last 71 with at least three catches.

The pregame was a little bit emotional for everyone, as the Colts honored Manning.  The City of Indianapolis got what it wanted today – the chance to collectively thank Manning for his years of greatness, and for turning a solid basketball town into one of the most vibrant football cities in America.  They also got to see the Colts run their record to 5-2 headed into the bye week.

The players need the bye to heal up and attack the remaining nine games on their schedule, and the city needs it because this felt a whole lot like a playoff game in January – for a lot of reasons.

There is a reasonably good chance that these two teams might hook up a second time.