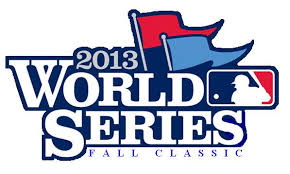 I just watched ESPN’s Nomar Garciaparra give the advantage to the St.Louis Cardinals lineup and rotation, call the bullpen a draw, and hand John Farrell the nod over Cards manager Mike Matheny.  He then picked the Red Sox in six.  Makes a lot of sense.]

Asking a guy whose perspective is so clouded by a love for all things Red Sox to analyze the series in the first place is a good question, so let’s a harder look at the 2013 World Series piece by piece:

Molina is the best defensive catcher in the game as well as the best handler of pitchers.  Saltalamacchia hit 14 home runs in 2013, but his 139 Ks in 425 ABs is a late inning problem against the Cardinals strikeout happy bullpen.  Molina might be the most valuable player in the game considering all phases.  He is a manager on the field, and more and more dangerous at the plate.

Craig would have likely gotten some MVP love from voters if not for his late season foot injury.  He hit over .450 with runners in scoring position.  Adams filled the Craig role, and gave the Cards more power.  Craig and Adams combined to hit 30 HRs and post 138 RBI.  Craig’s OPS was .830 and Adams’ was .839.  Napoli is no stranger to the Cardinals, as he was the first baseman for the Rangers during the 2011 World Series going 7-20 with two home runs, eight RBIs, and six walks.  He was pretty damn good.

This is closer.  Carpenter commited nine errors, which Pedroia committed five, but Carpenter has an edge in range.  Offensively, the 27 year-old Carpenter led the National League with 126 runs, 199 hits, and 55 doubles.  He hit .318 with an OPS of .873.  Pedroia, 30, was productive but five years removed from his 2008 season that was very similar to what Carpenter did this season – leading the AL in the same three categories Carpenter did this year.

Third Base – David Freese vs. Will Middlebrooks – Advantage Draw

Neither is an outstanding defender.  Freese has a slight advantage, just as Middlebrooks has better power as a hitter.  Middlebrooks OPS is .696 and Freese’s is .710.  In late game situations, Middlebrooks can be a bomb machine who changes games, but who wants to bet against Freese after his magical run during the 2011 postseason.

Matt Holliday is a professional hitter with some pop hitting .300 with 22 HRs, 86 RBIs, and an OPS of .879, and Gomes is a bit of a poor man’s Holliday with an OPS of .771.  He played roughly half a season and totaled 13 HRs and 52 RBIs.  Not as good an average or power numbers, and they are equally average defensive outfielders.

Ellsbury’s offensive value is going to bump up against the Cardinals best defender, as Ellsbury provided the spark to the Red Sox with 52 steals while being caught only four times.  Few run against Molina, but you can bet that Ellsbury will test him.  Ellsbury is a better defensive center fielder too.

A little closer than you might guess, but Big Papi’s OPS of .959 is easily the highest among players on either team, as is his 30 home runs.  One of the factors in this series will be the Cardinals pitchers ability to mitigate Big Papi’s influence on the game.  The Red Sox need him to hit the ball hard with men on in order to compete.

Wacha is the key.  Without his emergence, the Cardinals would lose two match ups, win Wainwright vs. Lester, and draw between Lynn and Peavy.  There is a reasonably good chance that Wainwright and Wacha sweep games one and two in Boston, and Buchholz and Peavy win three and four in St. Louis.

Trevor Rosenthal is an unhittable fastball machine, and Carlos Martinez and Kevin Siegrist are solid components, but Koji Uehara has been incredible as a closer.  He has allowed two earned runs since the beginning of July in 49 1/3 innings.

This is an admission of ignorance more than anything else.  I might have watched the Red Sox play a total of 20 games this season, including the postseason, so I have no feel for Farrell’s quality as a leader or strategist.  Hard to argue with a guy who won 28 more games in his first year than his predecessor in 2012, but that likely has as much to do with Bobby Valentine’s idiocy as Farrell’s genius.  As for Matheny, I’m not a huge fan.  Without Molina behind the plate, I think Matheny would be exposed.  His use of the bullpen has evolved throughout the season, but I’m still not a Matheny guy.

Prediction for the series – Cardinals in six.  I think it comes down to the starts by Wainwright and Wacha.  I think the Cardinals hold serve in those four games, and the Cardinals front office will have to figure out the structural issues at Busch Stadium needed to accommodate a 12th banner.

I can’t help but wonder what would have happened to this team had the Cubs Carlos Marmol not walked three and thrown the wild pitch on September 24th to give the Cardinals hopes for a wild card some life.  What if Rafael Furcal dosn’t hit the leadoff triple in Game Five of the NLDS Game Five against the Phillies?  The Cardinals believe because they succeeded and succeeded because they believed.

Predicting what magic will transpire beginning tomorrow night is impossible, but there seems to have been some divine providence in the results of the Cardinals three year run of excellence.  How else to explain the infield fly call in the wild card game last season?