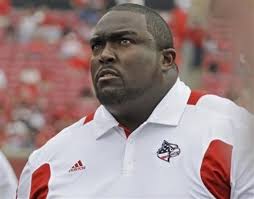 Louisville football assistant Clint Hurtt has a show cause and a job. That doesn’t happen everyday.

I love bureaucrats – not really.

They say one thing while doing the opposite leaving everyone confused as to what they really mean.  That confusion is the centerpiece of their professional strategy.

Today, University of Louisville Athletic Director Tom Jurich told the media that he has decided that 2011 ESPN.com recruiter of the year would remain on U of L’s football staff despite today’s announcement of the NCAA’s show cause order earned through Hurtt’s cheating when at the University of Miami and failure to cooperate with the investigators.

A show cause order does not mandate that a school terminate employment, but it does require a school attempting to hire him show cause as to why that coach should be allowed to work for an NCAA member university.  What a show cause really means is that the NCAA doesn’t believe that coach is a force for good in collegiate athletics, and should have no place on a staff.

Jurich’s stance leaves me conflicted.  I don’t know Jurich, but he ran a very good guy off of Louisville radio through his relationship with that radio company’s management.  The guy I’m talking about isn’t a flame thrower, but a thoughtful and very friendly host/man.  Jurich, in effect, did to my friend what the NCAA is trying to force him to do.

At the same time, I kind of like the display of disrespect for the NCAA that Jurich is showing.  If the NCAA had any sack at all, it would do something – anything – to get the attention of coaches who see the risk/reward of cheating to favor them at such a wild proportion that they cheat in plain sight, and brag to the media about it.

Books and investigative pieces that detail the brazen corruption so pervasive in college athletics are being published at a dizzying pace.  Sports Illustrated worked for months putting together a five-part indictment of Oklahoma State Football that was so mundane, I stopped reading it after the first three parts.  As I read, I kept asking myself, “So what?”.  We all know that recruiting violations occur, that hostesses bed recruits, that tutors complete homework assignments for nonmotivated students/game changing athletes, that players do drugs occasionally, and that agents find a way to get cash to student-athletes.

The NCAA’s enforcement staff has been relegated to the role of high school rent-a-cop.  Back when I was in high school, there were enough people getting stoned in their cars during lunch that the school hired a short and squatty 35 year-old cop to patrol the lot.  At first, he wore a uniform.  He was easy to spot and avoid.  Then, he tried to get clever, dressing in tie-dyed tees and jorts to blend in.  Yeah, real clever.  The only chance he had to catch anyone was that their laughter would betray them.

The NCAA inspires so little fear that Jurich refused to fire a coach who was issued a show cause order.  I can’t remember that ever happening.  One minute during today’s media event, Jurich said that he has great respect for the NCAA and the enforcement staff, and in the next he said that his refusal to fire Hurtt was due to a disagreement as to whether Hurtt cooperated fully with the NCAA enforcement folks.

This is like getting a speeding ticket, refusing to pay, and having the court throw up its hands and say, “Oh well!  Fine, don’t pay then.”

The NCAA has been so thoroughly marginalized since the heavy handed Ohio State penalties and the Penn State sanctions that lacked any measure of due process that a big shot AD like Jurich is basically ignoring them.  The NCAA acted almost instantly in eviscerating the Nittany Lions, but took 2 1/2 years from the beginning of the Miami investigation to today’s announcement of its penance.