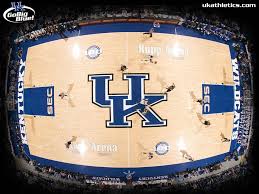 Kentucky fans are relentless in their love for Big Blue Nation, and their wild proclamations of physical and moral superiority are beyond debate.  If you try to explain in a rational way why Kentucky’s winning should ring hollow, they lose their minds.

Arguing gun control or abortion is more fun than engaging with Kentucky fans in a conversation about the merits of Kentucky hoops, and how its coach builds its roster, but in an effort to be clear, I step back into the abyss of illogic and blue blindness.

The circuitous logic from Kentucky fans is much fun that of New Yorkers explaining why they live in the best city in the world, which is very similar to an Abbott & Costello routine.

With Kentucky, it’s the same thing.  Kentucky is the best because it’s Kentucky.  Anyone who dislikes the methodology that causes the success is an idiot, anyone who writes about it is a troll, and anyone who doesn’t worship at the alter of John Calipari is a hater.

Kentucky fans took exception to a lack of respect I articulated on Twitter today, and I promised I would provide the kind of explanation that can’t be expressed in 140 characters.

Let’s begin with a short recitation of those things for which I do not hold Calipari accountable:

Okay, now we know what he isn’t accountable for – what are the things that rubs me the wrong way?

I could go on and on.  The plantation mentality of college athletics is at the crux of my problem with Calipari.  He profits greatly from a system that won’t provide a student-athlete a small stipend to pay for he and a date to grab a sandwich and see a movie.  He operates within the rules, and then claims that because he’s within the rules, he is absolved of all blame for a system run amok.  Very convenient, and I don’t like that either.

Kentucky fans on Twitter wanted to know what my problem with Calipari is.  There it is.  Just because the NCAA is unwilling or unable to find the reasons for which Calipari should be banished from college athletics doesn’t mean they don’t exist.

Today, those Twitter folks in Big Blue Nation said that they wanted to know how Calipari exploits the people he turns into millionaires.  I would argue that the only person John Calipari has turned into a millionaire is John Calipari.