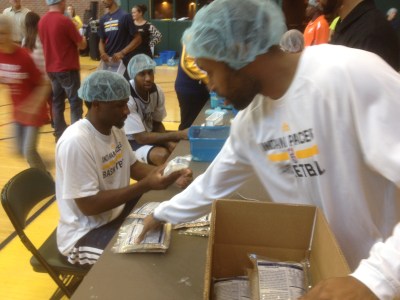 From left to right, Solomon Hill, Rasual Butler, and C.J. Watson wear fashionable headgear as they prepare meals for 60,000.

The Indiana Pacers are not just co-favorites to win the NBA’s Eastern Conference, according to contributors from Sports Illustrated, they are a team that enjoys making Indianapolis a better place through their work and example.

I’m not such a sap that I believe the ubiquitous marketing people who try to extoll the virtues of the players for their team.  These folks are everywhere, and the truth is, most of the time they are full of crap.  Most players like playing, cashing checks, and taking advantage of their position and wealth with women.  Anything that gets in the way of those focuses is seen as a waste of time.

The Pacers have some exceptions to that rule, and George Hill is at the top of the list.  Yesterday, the day before the season opener against Victor Oladipo and the Orlando Magic, Hill was the face in front of the Kids Against Hunger event held on the Pacers Practice Court.

And Hill was more than the face.  He and other players, including Solomon Hill, Ian Mahinmi, C. J. Watson, and Rasual Butler were actually doing the work to fill and seal servings of food for those in Indianapolis and Haiti who are in need.  An incredible 59,686 meals were packaged by the Pacers and a hearty group of volunteers.

Every time I show up at a Pacers charity event, the 27 year-old Hill is front and center.  He is an Indianapolis guy living his dream playing for his hometown team.  Hill was a scoring machine at Broad Ripple High School (David Letterman’s alma mater), went largely unrecruited winding up at IUPUI, was drafted by the San Antonio Spurs, and was traded to the Pacers for Kawhi Leonard.

He’s locked in contractually through the 2016-2017 season, and that’s good news for the Pacers and Indianapolis.  The need for players to show some emotional investment in the Indianapolis community is one of pragmatism.  The ticket buying pool outside large markets like Chicago, New York, Los Angeles, or even Atlanta or Philadelphia is minuscule, so it’s not enough to win, the team has to assimilate into the community or wither.

That means going to schools to pass out gifts to children in need, and it means sitting at a table filling bags with dry food.  Forcing players to buy into that mindset is difficult because if the heart of a player isn’t relatively pure, people see through it immediately.  The key is to draft and trade for a quality in addition to height, length, lateral quickness, hand size, touch, and grit.  That’s a desire to leave the world a better place than they found it.

It makes people feel better about liking the players when they do good work.  Winning is of the utmost importance, but the bind between a professional athlete and the town in which he plays can be largely determined by the good work they do.  If the goofy bastards who brawled in Detroit and shot up the Eight Second Saloon and downtown Indy on a frighteningly regular basis had continued to win, fans would have bought tickets, but as soon as the team began to show chinks in its armor, it would have been adios.

This group of guys is driven to win and to help.  They are easy to like, fun to deal with, and don’t make the media feel like morons for buying in.  That begins with George Hill.

Tonight, the Pacers will get to work trying to win the franchise’s first NBA title since joining the league in 1976.  Yesterday, the work they did will feed 59,686.