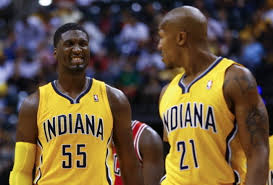 Roy Hibbert and David West anchor the front court that will need to stay healthy for the Indiana Pacers to reach their potential – and win an NBA Championship.

We all want to know what’s going to happen with the Indiana Pacers this season.  There is hope that championship caliber basketball will be played at Bankers Life Fieldhouse for the first time in a decade.  We want to know what the future holds – and we want to know now!

How many games are the Pacers going to win, and can they beat the Heat and/or Bulls in the playoffs?  Is Danny Granger healthy, and if he is, can he help the Pacers win?  And what about the bench – are they going to be the upgrade we have been led to expect? Who can answers my damn questions?

Well, because I  like to see reality play out in real time, I have no idea.  Danny Granger?  I don’t know, and while I care about Granger the person, whether or not he can play this season at a level which will help the Pacers win is unimportant to me.  Number one, I can’t control it, and second, the Pacers showed they can play at a championship level without him.

Granger can shoot, and as a component piece to an offense, he can shoot it in streaks and might be able to win a playoff game or two – like a Robert Horry or Glen Rice type player.  If he continues to suffer nagging injuries, that will be very sad for Granger, but the Pacers will be fine.  They are not dependent upon Granger for their success.  Time will tell if the legs can endure.

Watching the national media this time of year drives me nuts.  Seven months ago, the national baseball knuckleheads were lining up to support the candidacy of the Toronto Blue Jays as a favorite for the American League East crown.  How’d that work out for everyone?

Two years ago, Vince Young declared the Philadelphia Eagles to be a “dream team”.  They finished 8-8.  In 2012, they were 4-12 and Andy Reid was on his way to Kansas City.

The moral of the story is that prognostication is a game for backup quarterbacks and people who are paid to be wrong in a compelling way.

Which group will be better?  On paper, this year’s second unit is at least a step up on the previous one.  There is no comparison between Luis Scola and Tyler Hansbrough.  Would you rather trust Green or Granger to knock down a shot?  I thought so.  Watson and Augustine are a little tougher to distinguish, but Watson is a vet who can defend.  Young vs. Hill is a total unknown.  I always liked Young’s effort, but the upside on Hill is significant.  The other Hansbrough is a non-factor, and to be honest, all I remember about Ayres is the confusion I had last year when he was on the floor.  I asked “Who’s that guy?” every time he reported.

I have a gift for remembering only the important details of a roster.  It served me well with Ayres.

A lot of things can happen to make the real life version of the second unit perform at a lower level, but it would take some atrocious chemistry, injuries, and general malaise.

Whether the Pacers can beat the Heat and/or Bulls in the playoffs is a silly question.  Of course, they can.  Will they is the real question, and there is not a person on the planet who can tell you with confidence whether they will play each other in seven months.  There are way too many variables to consider.

One thing I can tell you with certainty – the Pacers are 14-to-1 underdogs to win the NBA Championship, and that is a righteous number.  The odds don’t reflect what oddsmakers honestly believe to be the chances of winning, but indicate where the money is being wagered.  That Houston and Brooklyn are both 12-to-1 shows the bias people have toward star driven rosters and away from logically constructed teams.  There is no well-informed NBA expert who would bet the Rockets or Nets in front of the Pacers.

The Pacers will sink or swim based upon their ability to avoid losing regular season games against less talented teams.  They will need home court advantage to be favored in any series, and remember the 2013 Eastern Conference Finals came down to Game Seven in Miami.  That would leave some to believe that the Pacers were only one game away.  Not so fast, the Pacers finished 16 1/2 games behind the Heat in the regular season.  That’s the deficit that Bird focused on closing with the acquisitions on Scola, Copeland, and Watson.

If they can maintain focus against Denver, Boston, Charlotte, Orlando, Phoenix, Atlanta, and other teams they should beat, while splitting with those believed to be playoff teams, they have a chance to make you $14 for every one you bet.