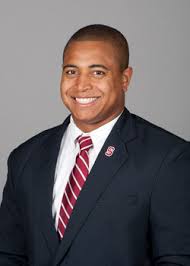 The voicemail from Miami Dolphins offensive guard Richie Incognito to second year offensive tackle Jonathan Martin puts on full display the guy who is the punchline to a lot of jokes in St. Louis.  During his time with the Rams, Incognito was known for irrational behavior, and the media happily shares stories about his time in St. Louis.

A month after moving to St. Louis in 2011, I attended several workouts at Rams Camp where media folks would say, “Richie” in response to a story about crazy behavior by former Rams, and laughter followed.  I looked at the roster and staff directory, and couldn’t find any Richie.  It was a challenge to try to figure out who this guy was.

The crazy behavior attributed to “Richie” didn’t represent the antics of a crazy and fun guy, but of a person with issues – as in the kind of crazy to be avoided.  I finally asked who Richie was, and was told, “Incognito.”  I recalled some odd stories about a guy by that name who played at Nebraska.

Jonathan Martin, a well-educated second year player from Stanford decided that this level of idiocy threatened his safety, and put him in a position to either fight or be psychologically dominated by a lunatic.  As a result, he decided to leave the team.  That’s a logical choice, and it’s ridiculous to argue with.

On his radio show today, 1070 the Fan’s Dan Dakich said that dealing with crazy on crazy’s terms is stupid.  Of course, he’s right.  And assuming that Martin is out from under Incognito’s reach because the Dolphins and NFL have stepped in is naive.  Whether or not Incognito has been suspended, Martin is still potentially in danger because crazy is crazy, and according to anecdotes in St. Louis and elsewhere, Incognito is crazy.

And now his livelihood has been threatened.  Crazy plus threatened is not a great combination for an enemy to be.

Some boobs are criticizing Martin for not smacking Incognito in the mouth to end this madness, but they are assuming a level of frivolity in this bullying that doesn’t exist.

Click here to take great care of your teeth.

Incognito has a history of bad conduct stretching all the way back to his time at Nebraska.  He was suspended by two separate Cornhuskers coaches, the second time indefinitely by Bill Callahan.  One month after his final suspension at Nebraska, he was dismissed from Oregon one week after transferring for violating team rules.  During his time in the NFL, he has been voted the league’s dirtiest player, and released by the Rams for an incident with Steve Spagnuolo.  Rams coaches were afraid to single Incognito out in meetings for fear he would respond physically.  He has also baited opposing players into fights with his on field tactics.

The only surprise among St. Louis media is that it took this long for Incognito’s irrationality to corrupt his ability to continue to earn a living in the NFL.

Incognito is a menace, and should be treated as one.  That’s what Martin did, and it took bigger stones than trying to smack Incognito in the mouth.