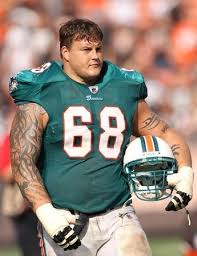 If Marc Heller had been built like Richie Incognito, I probably would have opted for Plan B, but seventh graders don’t look like this guy.

The mess between Miami Dolphins guard Richie Incognito and teammate Jonathan Martin has brought the discussion of bullying to the fore, so talking about an option my Dad shared with me about dealing with bullies seems relevant.

This is not meant to be a how-to, just an anecdote about a seventh grade kid who hated going to study hall for a few weeks because of the way he was treated in that classroom.

When I was in the seventh grade, my family had just moved back to Lake Bluff, Illinois, and I was the new kid.  In study hall, I took the occasional thwack in the ear, and whack of a pencil to the head.

Not being a big guy, my chosen battleground was in verbally assaulting those who threatened me physically.  That worked for the kids who were smart enough to know they were being insulted.  For the dopey bastards in this study hall, that only resulted in confusion.  It did not get the job done.

The torment escalated in that study hall until one day in the halls as we moved mid-period from one classroom to another, six or seven of these dolts started hitting me on the head with pencils and knocked my books from my hands.  I snapped, throwing the book I was able to hold onto at the lockers, and left school.

It never occurred to me that a kid could just walk out of school in the middle of the day without penalty, so when I was outside I faced a decision of where to head.  I could go home, where Dad had a home office, or to my grandmother’s.  Easy call.  My grandmother would have a shrimp cocktail for me, and my Dad would probably yell at me for bolting.

After I polished off the little glass container of Sau-See Shrimp, my grandmother told me that I should call Dad to tell him what happened.  She was always right about that stuff, so I called and he said he would be right there.

I got in the car and explained in greater detail what happened.  He wasn’t disappointed or angry, but said, “Look, if you want that to stop, it’s an easy fix.  The next time a kid picks on you, hit him in the mouth with your fist as hard as you can.”

When I told him that I would get in trouble for hitting a kid, he said he could take care of that.

Instead of dropping me off at school, he walked me into school and made a bee line for the office.  The principal and teacher of the study hall I abandoned were already there talking about me.  Dad introduced himself, and said, “Kent told me what happened, and what I told him to do is hit the next kid who touches him as hard as he can in the face.  He’s worried that he might get in trouble for that.  If he doesn’t hit the next kid who bullies him, Kent is going to face a much tougher punishment at home than you could ever give him.  Thanks for your time.”

Dad patted me on the back and told me to go to Mr. Johnson’s math class.  Mr. Itzov and Mr. Thompson looked at him like every authority figure looked at Dad, like they had never heard anything like what he said, and better to not engage him further as long as he is leaving on his own.

Two weeks later, I’m in the same study hall finishing up some math, and a kid named Marc Heller ran up from behind and grabbed my pen.  I thought, “Well, here we go.”

I walked up to the front of the classroom where Heller was holding the pen like bait, as though I was supposed to try to grab it.  I threw my fist with all the fury a 78-pound seventh grader could muster, and connected with Heller’s cheek.  His eyes teared, and he looked shocked for about five seconds.  Then, he face contorted in rage, and he tried to charge.  I hit him a second time, and Mr. Thompson jumped in to split us up.

Heller was bigger and stronger than I was, and truth be told had the fight been allowed to continue, it might not have ended well for me.

From that point forward, I had nothing to worry about.  Heller and the other goons never bothered me again.  Whether it was because I sacked up and fought, they thought maybe I was crazy, or a combination of the two, Dad was right on the money with his advice.

Mr. Thompson didn’t send me to the office, likely because of Dad’s blunt speech mandating that I act, and I felt in control in that study hall for the first time.

There are obvious exceptions, like in the case of special needs kids who are picked on or bullied, but in my experience, when a bully no longer feels confident that he or she has control of the environment or your response to them, behavior changes.

It might cost an ass-kicking, but the best way to end bullying is to come at the cause head-on.  Throwing hands at a guy who appears to be a borderline psychotic like Incognito is a different deal.  Abandoning ship might have been the prudent course for Martin.