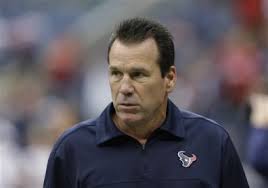 Gary Kubiak received the message that there must be more to life than coaching 20 hours a day.

Houston Texans coach Gary Kubiak is in the hospital after suffering what is being described as a mini-stroke at halftime of the Sunday night game against the Indianapolis Colts, and Denver Broncos coach John Fox underwent heart surgery yesterday to replace a valve.  As a result, people are asking whether coaches are working themselves into poor health.

Of course they are, but it doesn’t stop at coaches.  People who manage employees and possess a functional conscience work way too hard and don’t take good care of themselves because the consequence for living a balanced life is not only professional failure they will own, but could cause the failure of the enterprise they manage.  That costs everyone their jobs.

When jobs are at risk, so are the college educations for the children of those who are displaced.  In some cases, the fallout is worse.  Divorce, hunger, foreclosure, and worse might ensue if the business fails.

You want to lose sleep, manage a business on the ropes.

The careers of players and coaches are so tenuous in the National Football League that every week is a report card and could result in a decision on leadership or roster construct.  There are 17 weeks in a season, and each can result in an adjustment that changes the lives for better or worse of everyone involved.

In business, usually we deal in quarters.  That means four games per year that bring grades, change, and either rewards or penalties.  In business, it can be a little different because if you work for a place with several satellite offices, the poor results at one can cause consequences at others despite their operating with efficiency and excellence.

At least in professional sports, each team is an island.  If the Bears lose, the Colts don’t need to cut someone.  In media, if a cluster, station, or newspaper in San Francisco goes through a tough time, Phoenix might have to cut $380,000, and that means people.

Deciding how to get to that total can brutally difficult, especially if Dallas has a tough road last year that already caused Phoenix cuts of $470,000.  So managers prepare for their battle – the meeting with corporate where you fight for the jobs of your people who might be sent packing through no fault of their own.

It’s easy to say that living a balanced life is the key to a healthy life, but when the decision is whether to workout and play catch with your son, or prep for a meeting where a poor performance is going to cost six people their livelihood, you sack up and work late.

Multiply that by decisions made at the end of the workday 260 times a year, and you begin to understand why people in all businesses have heart attacks, strokes, ulcers, and mental breakdowns.

Coaches can either prepare for the following Sunday, evaluate potential draftees and free agents, game plan ahead for the following season, build individual workout plans for players, or spend time with family and eat right.  In college, recruiting is never done, and a little extra work might make the difference in the commitment of a kid who puts your program over the top.  Does a coach watch his daughter sing in the school choir, make a few extra calls, or go on one more visit to get that potentially special player?

How much tape is too much tape to watch?  How many hours is too many in prepping for a meeting?  When the consequence is a life changing event for all who trust that you are leading them effectively and passionately, there is no such thing as too much.  The consequence for that can be a fractured family, a kid being unsure who you are, and the occasional attention getter from your body.

And until there is a point of differentiation that is more meaningful than working your ass off, guys like Kubiak, Fox, and thousands of other managers will be harshly reminded that there is a brick wall out there for each of us that we cannot run through.