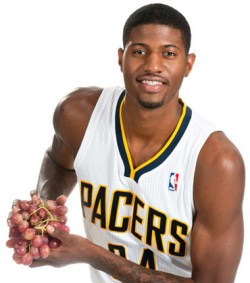 Paul George is making baskets like flinging grapes into a bucket.

The Indiana Pacers played at home on the back end of games on consecutive night seven times last season, and they won all seven.  That bodes well for the Blue and Gold tonight as they host the Chicago Bulls after dispatching the Detroit Pistons last night.

This is the first time since 2004-2005 that the Indiana Pacers have started a season with four straight wins.  That season was the beginning of the end of an era, as the Pacers brawled in Auburn Hills after going 7-2.  The suspensions ruined the season, and soured the fans who had a tough time forgiving Thug Life – Indy Style.

This 4-0 run might be the start of something that heads decidedly in a different direction.  The Pacers aren’t just playing exceptionally well, but act like adults who enjoy being a part of the community for whom they perform.

The Pacers will try to take their season opening winning streak to five tonight at Bankers Life Fieldhouse against a team that is projected by some to be a rival for the NBA Central Division title.  Bulls point guard Derrick Rose didn’t want to elevate the Pacers to the level of rival before the season started.  He’ll need to back up his words with some improved shooting tonight if the Bulls are going to compete tonight.

The Bulls are 1-2, with their only win coming on a buzzer beating floater against the New York Knicks.  Rose is averaging 14.3 points on 17.3 shots through only three games.  His field goal percentage of 28.8% is likely more a result of the limited sample size of three games rather than a complete abandonment of his ability to score.

Regardless, these teams don’t much care for one another, and the Bulls will present a tough test as the Pacers try to bounce back after a hard fought win last night in Detroit.  The Bulls have enjoyed three days off to prepare for the Pacers.

Paul George played 41 minutes last night, and Lance Stephenson logged 39.  That makes tonight a little tougher for the Pacers, and that’s why teams have a very tough time winning 60 games – the vagaries of the schedule sometimes determine who wins and loses.

Before the epitaph of the Pacers winning streak is written, this type of game is why Pacers President Larry Bird wheeled and dealer during the offseason to bulk up the bench.  Luis Scola and C.J. Watson will log heavy minutes even if George Hill returns for tonight’s game after sitting the last two.

The NBA season is the longest among the three major sports leagues (I’m finally dropping the NHL as a major sports league as they are especially irrelevant in Indiana where they have been relegated to the scrap heap of fringe sports), and it’s best negotiated one event at a time.  The travel is exhausting, and there are some nights that a team just will not have its legs or be its best.

The Pacers have a nice balance of youth and experience that should serve them well during the tougher nights, and tonight may be one of them.

Paul George might be the MVP of the NBA this season, and Lance Stephenson could be the Most Improved Player.  Tonight and the game Saturday, November 16 at Brooklyn after a Friday against Toronto will be the nights when they can earn those honors.

Last season, the Pacers were 5-7 on the back end of a back-to-back pairing of games, while going 7-0 on home back ends (they lost the last game of the season, which was the night after a game that was cancelled in Boston following the bombing at the Boston Marathon).

What’s all this mean?  Who the hell knows.  It could be that the Pacers are a little bit smarter on the road than other teams, and that provides a solid pragmatism to Bird’s approach to bringing in good character guys.  The road offers temptations that these Pacers appear to be able to refuse.  It could be that the teams they were playing had bad nights sometimes, and rotten nights otherwise.