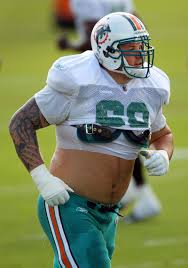 The winds are shifting in Richie Incognito’s favor as Jonathan Martin stays quiet.

First, Richie Incognito – a complete kook – was tormenting Jonathan Martin – a sensitive genius.  Then, coach Joe Philbin instructed Incognito to “toughen up” Martin.  Then, quarterback Ryan Tannehill says that if you asked Martin two weeks ago who his best friend on the team is, he would have said Incognito.  Then, black teammates are saying that Incognito is an honorary black man and that excuses his use of the n-word.

Martin’s defenders – wait, I have heard from no one on the Dolphins team who has anything good to say about Martin.  The media is talking about how bullying is bad, but there is nothing specific being said positively about Martin.

As for Incognito, Dolphins can’t wait to line up to defend him, and it’s not just his brothers on the offensive line.  Wide receiver Brian Hartline might have been the most outspoken yet, and Tannehill stood up for him as well.

A couple of things are true here.  Among them could be:

It’s being reported that Dolphins GM Jeff Ireland told Martin’s agent that if he has a problem with Incognito, he should punch him.  If that’s true, Ireland is in trouble.  To officially advocate violence in the workplace is a bizarre tack regardless of the inherent brutishness in the job description.

Worse for Martin, the media has shifted.  Incognito has gone from bullying pariah to somewhat misunderstood warrior.

Coach Joe Philbin backpedaled for making comments about the mess, deferring all answers until the NFL investigation is complete.

This whole deal smells a lot a DVD set of “Breaking Bad” where four episodes have been deleted.  There is more to the story than what we have heard, or none of this makes any sense.  People in the middle, like Philbin, Incognito, and Martin are well aware that there will be a winner and a loser, and all three are positioning themselves to not be the loser.

Martin is the guy who we should hear from next, as the lack of his perspective is starting to cause sentiment to shift (incredibly) toward Incognito, who was seen by St. Louis Rams players and coaches as a psychopath who could not be controlled or reasoned with.

When the media machine gets geared up like it is to generate a narrative, someone is going to be the hero and someone will be the scourge.  That’s the media’s job.  Nuanced relationships don’t play well with viewers and readers who want their news in 600 word or 90-second chunks.

Incognito looked like a prohibitive favorite to be the heavy for whom the consequences would be severe.  Martin was in the driver’s seat as the sensitive warrior for whom the internal bullying was just too much.

Now, it’s starting to feel like it’s even money that Incognito was acting at the pleasure of his bosses, and Martin has decided that leaving the team under these circumstances was a calculated choice that allows for continued financial wellness.

With the cancellations of most soap operas, ESPN is filling the void.