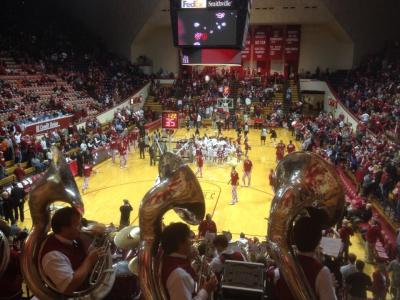 The tuba section of the IU Pep Band is right in my ear, and so far they are in better tune than the basketball team.

For one night I can set aside cynicism about Indiana’s Charmin soft non-conference home schedule and not give a damn one way or another about whether this game is against Kentucky or LIUBrooklyn.

It’s Bloomington, and very little has gone unchanged since I left, but Assembly Hall remains exactly the same – minus the giant scoreboard at center court.  Somehow, this misshapen mecca of college hoops has morphed from a multipurpose building to an iconic hoops theatre.

Nevermind my difficulty with the traffic cops that led to me parking just south of Foster Quad, or the disastrous remodeling of Walnut Knolls Apartments, it’s basketball season in Bloomington, and that has to be celebrated.

Indiana is exceptionally young.  The floor general and best offensive player is sophomore Yogi Ferrell, and the guy whose development most crucial to the fortunes of the Hoosiers is another sophomore, Jeremy Hollowell.

Early in this game, the Hoosiers looked young and imprecise offensively and long and active on the defensive end.

Most years, playing LIU-Brooklyn would be a waste of time – an exercise in overt dominance rather than a competitive game worth the cost of a ticket.

The youth of the Hoosiers makes tonight a little different, and that makes what I’m writing a little bit different too.

I started this post as an ode to Assembly Hall and the up and down history of the Hoosiers basketball program, but suddenly a team that couldn’t have successfully recruited one of Indiana’s walk-ons is leading the game 11-10 with 11:42 left in the first half.  Minus the shooting of Ferrell, Indiana has been ice cold from the field.

It’s impossible to judge shooting by the accuracy of an eight-minute period, but if Indiana shoots like this against a quality opponent, they are going to be run out of the gym.  There is a lack of cohesion on the offensive end that appears even more profound because of the missed open shots.

Now, it’s 18-12 halfway through the first half, and I’m starting to feel stupid for feeling superior while watching the end of the Purdue vs. Northern Kentucky game that the Boilers managed to win by a single point at Mackey Arena.

If the 10,000 or so here for the early tip tonight thought that Indiana was going to move past the loss of two of the top four players taken in the 2013 NBA Draft, they weren’t thinking clearly.  But people expected a better performance against a team that shouldn’t be able to compete with the 30th anniversary team that sent North Carolina and Michael Jordan home from the NCAA Tournament.

Tonight’s game, whatever happens in the end, shows a very young team with a lot of pieces that aren’t meshing well in early November.  How much fun January and February are will depend upon how quickly they move from being a disparate parts to a cohesive unit.  Based upon the first half of tonight’s game, any talk about fun in March should be shelved.

This team doesn’t mark a step back for Tom Crean and the Hoosier program he has rebuilt.  It’s a step toward a different kind of rebuilding – the kind that comes from the attrition caused by success.

Freshmen Noah Vonleh, Troy Williams, and Stanford Robinson are really talented, and Ferrell is a Big Ten player of the year candidate.  That makes Indiana dangerous, but this batch of Hoosiers might take another year to ferment into a potential Big Ten champion.

The score at halftime is 36-33 in favor of the unheralded LIU-Brooklyn squad.  That’s not a result that will please Hoosier fans, but that might happen from time to time this season.

I walked into Assembly Hall without any informed expectations other than a good hot dog and some nostalgia.  Check and check.  Great basketball will have to wait.