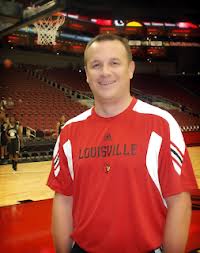 Looks like a guy who would buy the house a cold beer, and tomorrow night, Louisville women’s hoops coach Jeff Walz will do just that.

My allegiance is not hard to win.  I’ll never sell my version of the truth to anyone, but if a coach wants me to like him personally, buying me a sandwich or beer paves a straight and smooth route to my heart.

Lousiville women’s basketball coach Jeff Walz is not buying me a beer, but he has offered to buy a beer for the first 2,500 fans attending the Preseason WNIT semifinals at the Yum! Center who are 21 or over.

Walz knows how to win the hearts of fans, and that’s reason enough to like him, but he’s also an outstanding coach who leads a fun team to watch.

For those who think this is a school run and funded stunt that Walz has agreed to slap his name on, the athletic department says that isn’t the case, and that the cost of the beer will be covered by Walz personally.

If you are concerned that a university is supporting the unhealthful drinking habits of college students, the game is on a Thursday night, and there are exactly 46 college students across the country not drinking beer on a Thursday night.  Walz isn’t supporting keg stands or floppy cup tournaments on the concourse – he’s buying one beer for each of the first 2,500 fans, including the elderly.

Lightening up is something that doesn’t happen very often in life, but this is a pretty good time for it.

Thanks to Jay Bilas who hipped me to the event with a very funny tweet: