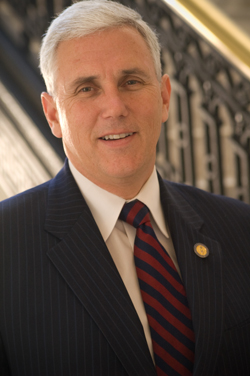 It’s been 13 years since we worked together, but Mike Pence still looks exactly like Mike Pence, and he still thinks like him too.

There was a time before Mike Pence was Indiana’s governor, a time before he was a congressman, a time when he was a talk radio host on Network Indiana and WIBC in Indianapolis.  And he was one of the hosts with whom I had the most fun working with.

When I had a meeting with Mike to talk about his show, his attention was devoted to whatever insight was shared.  He was a very dedicated pupil, and was a fine host.  Whatever guidance was offered, he adapted to it.  So it was very important to advise him well.

Conversely, Greg Garrison accepted no guidance at all.  Meet for two hours, and the next show was exactly like all those that preceded it.  Most of the time, that was okay because changing Greg is as pointless as trying to re-teach Reggie Miller to shoot a basketball because his form isn’t pretty enough.

Mike was friendly, spirited, and dedicated to giving listeners what they came for each and every segment.  He was a polite conservative who treated all callers with respect while passionately sharing his views.  There was no screaming, no anger, and no grudges held toward those with a differing perspective.

I was proud of Mike when he ran for congress because the decision represented a tremendous risk.  Leaving the show to campaign required that we find a replacement, which meant that backtracking into radio would at least be temporarily impossible.  Losing was not a likelihood as the radio show was heard throughout the district in which he ran, and a daily three-hour informercial for his views was impossible to compete with.

Before Mike went to Washington, I was concerned that he might fall prey to the siren song of the lobbyists, and that he might abandon his principles for the convenience of the ends justify the means outlook that is so pervasive inside the beltway.  My worry was unfounded as Mike was always exactly who he was whether on the floor of the House of Representatives or in the media.

I am relatively apolitical, having had my interest exhausted through hundreds of contentious family dinners that pitted the ultra conservative anti-government views of my Dad’s side of the family against the Irish-Catholic left leaning Kennedy-esque beliefs of my Mom’s Family.  The arguments were outrageous, occasionally angry, and always hilarious.  Watching was fun, but I never had any interest in participating.

Most of these epic battles were a point/counterpoint about the evils of those with whom my Dad or Grandmother disagreed.  Dad would attack Roosevelt for being a socialist.  My Grandmother would defend him.  My Dad would do an incredibly insulting imitation of Eleanor Roosevelt.  My Grandmother would attack Nixon for Watergate and his sweaty upper lip.  My Dad would launch into a scathing rebuke of John F. Kennedy’s libido and mismanagement of the Bay of Pigs.  There was yelling, and both seemed to harbor no lasting ill-will toward the other.

During the final argument I recall – the granddaddy of them all – my Dad had squirreled away a prop, so that when my Grandmother defended Kennedy, Dad ripped Jackie Kennedy Onassis for her second marriage that was motivated by wealth.  My Grandmother became furious at Dad’s insinuation of amorality.  Dad ran to the bedroom and returned with a magazine that featured a nude picture of Jackie on a beach.  If not for the strength of her skull, my Grandmother’s head would have exploded.  Angry comic Lewis Black has never been this irate.

What I demand of elected officials is that their ambition is in representing their beliefs in an unvarnished and transparent way.  Those whose beliefs are contrived to win votes are vermin, regardless of the side of the aisle on which they sit.

Whether or not I agreed with Mike, I always believed he did what he believed.  That’s all I require, and he continues to be true to himself.

If you agree with Mike’s views, you don’t need to consider anything else, but if it matters to those who disagree, Mike is always exactly who he is.  And it was good to talk to him for a few minutes today.

One thought on “Governor Mike Pence at Pacers Practice; a Reminder of Past Fun Had at Emmis”