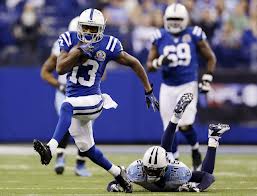 Colts fans hope to see a lot of T.Y. Hilton running away from the Titans secondary tonight, but that won’t tell the tale of this game.

The Tennessee Titans, who have lost their last three home games and four of five overall will trot out backup quarterback Ryan Fitzpatrick tonight.  Colts fans hope the similarities stop right there between the Rams and Titans stop right there.

A team like the Titans coming off a loss to the wretched Jacksonville Jaguars should have a very difficult time competing with the division leaders, but this is the NFL where the margin between winning and losing is razor thin.

The combined first half score of the last two Colts games is 49-3.  That kind of start is not going to get the job done against a 4-5 ten fighting for their lives.  The Colts need to come out sharp and ready to compete.

The Titans haven’t been too impressive themselves in their last five first halves, being outscored 57-24.  Three of those games came against arguably the best in the NFL – at home against Kansas City and San Francisco, and at Seattle.

To say the Colts and Titans are coming off disappointing losses is a massive understatement.  The Rams and Jags were both reeling, and a win by the Titans last week would have pulled the Titans to within one game of the Colts, and tonight would have been for the division lead.

Because they lost, the Titans face an absolute must win tonight.  With a win, the Colts open a three game gap with only six to play – one of them in 17 days at home against the Titans that could clinch the division for the Horseshoes.

Here are the five keys for the Colts tonight:

Trent Richardson must run effectively – The Titans defense is ranked 21st in rushing yards allowed, and the pass defense is stout allowing a league leading seven TDs through the air.  So far, Richardson has carried the ball 88 times for only 250 yards for the Colts.  The question is whether the problem with Richardson is the offensive line or his skill set.  The offensive line needs to man up and move people.

Andrew Luck needs to stay clean – Being sacked 2.5 times per game is just not satisfactory.  At some point, Luck is going to get hit in the wrong place at the wrong time, and then, as Stewie in “Family Guy” would say, “we’ll have funny sounding Muppets.”  There is no way to replace Luck, just as there was no way to replace Jim Henson.

Vontae Davis must play with passion – Last weekend against the Rams Tavon Austin, Davis allowed two receptions that each eclipsed the highest total in yardage he gained in his best game.  There was no excuse for the indifference he showed, and there will be no excuses tonight.  Without fellow cornerback Greg Toler, Davis needs to be especially aware and eager.  Will the Colts get the lockdown corner from the Broncos game or the guy who treated the Rams game like something fans regret paying to see in August?

Second receiving option needs to step up – T.Y. Hilton has been stellar since Reggie Wayne tore his ACL against the Denver Broncos with seven catches in each game for over 120 yards, but the number two slot vacated by Hilton has yet to be settled.  Either tight end Coby Fleener or Darrius Heyward-Bey need to fill those shoes.  So far, neither has distinguished himself.  Heyward-Bey has four drops in 18 targets over the last three games, and while Fleener has only been charged with one drop this season after a brutal preseason, he has only caught 7-15 targets since Wayne went down.  Someone needs to be that guy.

Robert Mathis and the defensive line needs to bring heat – Through nine games, Mathis has a career high 13 sacks, and 27 more hurries.  The Colts need big plays on defense, and Mathis is the game breaker who can cause mayhem for the opposing offense.  Robert Turner is the lowest graded starting center in the NFL, and is vulnerable.  The Rams allowed him to leave, and they don’t allow good players to walk out the door.  Fitzpatrick is ordinary at everything, so pressure can help him be even mores.

Stopping Chris Johnson is always a priority, but outside an outlier game against the Rams, Johnson has rushed for a total of 140 yards in five of his last six games.  The most he has totaled in those games is 39 yards on nine tries.  The Colts have been very solid against the run this year, ranked eighth by profootballfocus.com.

How successful coaches Chuck Pagano and Mike Munchak have been in forcing the memory of their two teams’ previous efforts out of their minds will go a long way toward determining who wins this game.  The Colts ability to overcome the loss of starters at every offensive skill position but quarterback is being tested.

They are a win tonight from being virtual locks for a division championship.  Whatever they have left in the tank, we should see tonight.

The Colts are 2.5 point favorites, which means Vegas has no feel for this game at all, and I don’t either.  I’ll take the Colts just because I like getting paid for a field goal win.

One thought on “Indianapolis Colts – With a Bounceback Win the Colts Lock Up the AFC South Crown; Five Keys to Victory”