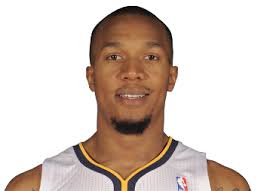 You do not walk up to West, shove a micrpone in his face, and say, “Tell me about practice.”  First, it’s not a question at all, and second it’s not the kind of solicitation that is worth West’s time.

When he responds, West looks you in the eye and answers as though you are having a genuine conversation.  That behavior demands respect and a level of effort in wording questions that is rarely exhibited by the media – a collection of overworked people trying to get their sound efficiently and move to the next assignment.

When West signed his extension, Pacers President Larry Bird was effusive of West in a way that I had never heard from him before.  Bird is another guy who answers questions honestly, and Bird had not been the guy saying those nice thing, it would have been hard for me to believe that any single player was as essential to a team’s success as the man Bird described.

The Pacers will take their 9-0 record into the United Center to play the Chicago Bulls, and West will play a big role in how the Pacers compete and whether they head to New York to play the Knicks next week as the first Pacers team to start their season with 10 consecutive victories.  Not only is West providing points, rebounds, and solid defense when he’s on the court, he shows the younger Pacers how to behave off of it.

David West is impossible to ignore, and what he says carries great weight.