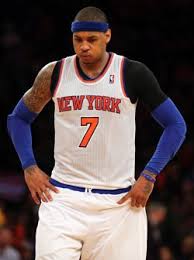 Carmelo Anthony is my least favorite player in the NBA despite his excellence. That I admit it doesn’t excuse it, but don’t mistake my admission for an apology.

Whether or not anyone on the rosters of the New York Knicks or Indiana Pacers remember the epic playoff battle these teams waged between 1994 and 2000, this regular season game harkened back to those days.

It was impossible to turn away from, and equally difficult to avoid becoming emotionally attached to the result.

I hate the Knicks for all the wrong reasons.  Every trait they exhibit, I loathe just because they are the Knicks.  And it’s the opposite with the Pacers.

The Pacers players have a lot of tattoos.  David West has “Carpe” on one calf and “diem” on the other, and I find myself wondering what that means to him.  For me it’s an obvious reminder that we don’t get a redux for today, so use it up.

The Knicks players have tattoos, so I look at them with disdain, “What the hell is with all that ink?  The designs are on top of one another, and I can’t see any of them – except the asinine Warner Brothers logo on Carmelo Anthony’s chest.”

Anthony is my least favorite NBA player, so I can’t stand anything about him.  Every time he catches, in my memory, he backs his guy down.  His selfishness leads to ugly statistics, and reeks of inefficiency.  Tonight, he scored 30 points on 28 shots.  What a self-immersed mope, right?

Paul George took 26 to score 35, and that doesn’t bother me at all.  If George and Anthony swapped stat lines, I would still defend George, and indict Anthony.

It doesn’t escape me that the Knicks would have had no chance to win this game without Anthony’s effort.  He had 18 damn boards to go along with his 30 points, but that doesn’t mean a thing to me because I just don’t like the guy.

And of course Kenyon Martin meant to roll up George’s leg in the overtime period.  It was a cheap shot because Martin knew the Knicks couldn’t win while George was on the floor.  Yeah, I know it’s stupid to infer evil at every turn, but when the Knicks foul I rant like Shooter Flatch in the asylum during “Hoosiers.”

Such is the illogic of my disdain for the Knicks, and my thorough enjoyment for these Pacers.

A loss tonight would have been a miserable outcome for the good people who recognize the team-first excellence of the Pacers, but the Knicks punting this game that they had in their hands was a just dessert for their fans, who are too blinded by their misplaced geographic loyalty to tell the good guys from the bad.

It’s ludicrous.  I know it’s ludicrous.  Fans are morons, or at least the kind of fan I am is moronic.  We believe they are bad (whoever ‘they’ are), and our guys are good – just because of the geographic proximity of the team.

Anthony might be every bit the good citizen in New York and George Hill is in Indianapolis.  I don’t know, and worse, I don’t care.  He wears a Knicks jersey, shoots all the time, and sneers constantly.  The truth be damned.

I would be a better person if I could sit and admire the amazing skill of every NBA player, but that isn’t going to happen.  I have my favorites, and none of them are Knicks.

None play for the Miami Heat either.  I spent have the summer yelling to anyone who pretends to listen that there is no way Dr. Dre would wait on hold for LeBron to finish his workout to take his call in the Beats commercial, “What kind of guy is so special he can’t stop his workout to talk to Dre?  Who does this guy think he is?!”

I have faults, but finding reasons to dislike opponents of the Pacers isn’t one of them.

The Pacers beat the Knicks, and I’m happy about that.  Our nice young men beat back the repeated attacks of a snide and angry group of thugs.  Evil has been vanquished, and the good guys are on their way to Boston to beat down the guy who abandoned Butler.  Disliking Brad Stevens is going to take some extra work, but I’ll get there.

My excuse of being a fan seems insufficient, but it’s all I have.  I like the Pacers, so hating my cartoon version of everyone else is part of the gig.