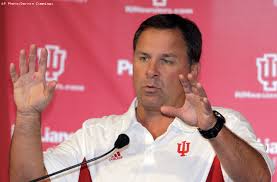 A guy who cut his teeth on the Oklahoma vs. Texas game at the Cotton Bowl knows rivalries, and Kevin Wilson sees the Indiana vs. Purdue game this Saturday as very important for state bragging rights.

From a national perspective, this game hasn’t meant much for a very long time, but football – just like politics – is local.

Two programs who have struggled this season will tee it up Saturday at Noon, and regardless of the number of wins these two teams have notched, they are going to leave it all out on the field of Memorial Stadium.

No, the winner won’t earn bowl eligibility, but many of the seniors have only this game to play in football careers that began when there were seven or eight years old.

Whatever happens during the Old Oaken Bucket Game will be the final memory of taping, putting their pads on, warming up, and looking in the eyes of teammates ready to join you in battle.

There is something about being a teammate that is different than any other feeling people have through their lives.  Many hope to replicate it in business, but that’s impossible, so this will be it for that band of brothers who have come a long way since their first year at Indiana under coach Bill Lynch.

Click here to have your teeth cleaned/fixed by the best – Dr. Mike O’Neil at Today’s Dentistry

Before you look at this Old Oaken Bucket Game as unimportant, remember that importance is based upon context.  In 10 years, only a few non-participants will remember the result, but for the player.

What does this game mean to Wilson?  As you’ll see that he’ll see it through the eyes of his seniors, and so should you.