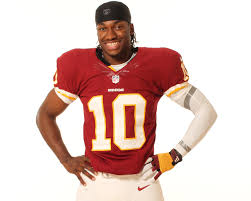 If you want to see RG3 smile like this, you need a time machine. If RG3 had a time machine, turning it back to the moment he flipped on the national spotlight would be a good destination.

If you want to be forgiven for mediocrity, don’t celebrate your excellence.  If that isn’t already attributed to someone in Bartlett’s Quotations, I’ll take credit.

That’s the lesson Robert Griffin III has learned over the past few weeks as his Washington Redskins have struggled to a 3-8 record.  At least that’s the lesson that is being served to him.

The quarterback to whom he is most often compared is Andrew Luck, who has followed a completely different path by shunning the national spotlight and appearing to be an entirely normal guy who happens to play football for a living.

RG3 has inked deals with Adidas, Castrol Motor Oil, EA Sports, EvoShield, Gatorade, Nissan, and Subway.   Mark Heligman, Griffin’s marketing agent at Creative Artists Agency, answered the question of why CAA broke it’s own rule about limiting RG3’s national exposure in an interview with the Washington Times, “A variety of factors came into play as to why we decided to put him out there a little bit more than other rookies in the past. Truth be told, the primary factor is that Robert had the desire to do it. He was interested in marketing from Day 1.”

Luck has slow played his marketing with deals that include Klipsch and Bodyarmor sports drinks.  I haven’t seen Luck appear in a commercial of any kind, and RG3 has been ubiquitous.  There have been some Luck sightings in NBC’s “Parks and Recreation,” but always with teammates.

The sports media machine enjoys building a narrative for the best known athletes and coaches that involves discovery, ascension, decline, pitting, and if they make it through the grind of the first four stages, finally redemption.  RG3 is in the midst of his decline after a meteoric rise.

In his post game presser, RG3 spoke of “character assassination” in the media in response to a story about his request that negative plays of his be eliminated for film study seen by the rest of the team.  The Redskins have denied the veracity of the report, but RG3’s response in concert with that of coach Mike Shanahan has painted him as weak, sensitive, and petulant.

Andrew Luck had one of his worst games in Arizona Sunday, and the number of seconds ESPN devoted to Luck’s career low 4.18 yards per attempt, and season low quarterback rating of 60.1 was zero.  Today’s coverage of RG3 is above the fold in the lead block of the oft repeated Sportscenters through the morning.

When RG3 used the media and his partnership with endorsers, he elevated public interest.  All of that is fine when the road is smooth, but as it gets a little bumpy, the winds of sentiment change.

For Luck, who still uses a flip phone that he had at Stanford, people aren’t nearly as critical.

When you shine a spotlight on yourself, sometimes you can’t control what it reveals.  That’s especially true when you were acquired in a trade that may turn out to be one of the worst in history, if the Redskins earn the #1 overall pick in the 2014 NFL Draft.  That pick, along with the Redskins first round picks in 2012 and 2013, and the second rounder in 2012 could wind up building the foundation for a long run of excellence for the St. Louis Rams.

America loves watching the fallen rise, but also are thrilled to see the mighty tumble.  Tough lesson for a young man to learn, but it was entirely foreseeable and avoidable.