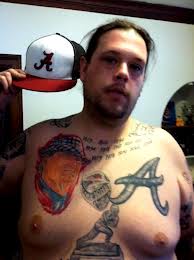 “People are stupid” is a simple statement, but it explains almost everything wrong with our society. Obamacare website malfunctions, the cancellation of “Arrested Development”, and full season ticket renewals to watch the Chicago Cubs are only justified by acknowledging humanity’s inability to process information correctly.

College Football needs the playoff due to begin at the end of the 2014 season, but damn it, that mess at the top of the BCS standings is sure a lot of fun to listen to others shriek about.  It’s a volatile topic in Alabama, where fans of both the Auburn Tigers and Alabama Crimson Tide are making spurious arguments to be invited to the BCS National Championship game despite each team’s single loss.

If a playoff existed this season, it would be Auburn and Mizzou for the third spot while Bama would probably have had its ticket punched as the fourth team by losing to Auburn Saturday night.  Seeing all those SEC fans happy would be a lost opportunity for those who love hysterical squawking.

That’s the shame of certainty.  When there can be no argument about what is right and wrong, the idiocy of sports fans is disguised.  Black and white is not where boobery thrives, but as has been the case through the millennia with human behavior, Alabamans will adapt and overcome.

Fans of Auburn and Alabama will find something else to yell about soon enough.  What they lack in logic, they cover for in volume and resolve.

The college football playoff is designed to determine with certainty which team is the best each season, and there is nothing wrong with that.  It won’t end the loud debates, but it will force fans to recalibrate.

Until then, Auburn fans are going to yell and scream about how they deserve a shot ahead of Ohio State.  Mizzou fans will be equally miffed if 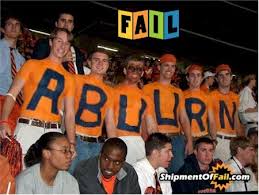 they beat Auburn this Saturday in the SEC Championship, and believe me when I tell you that Mizzou fans are among the least gifted thinkers in the history of sports.  Bama fans are still insane enough to believe a berth in the championship is a right not a privilege.

The screaming is deafening down south.  Thank God for Twitter allowing us to read the idiotic rants of hayseeds who measure their life’s worth through the performance of 18-to-22 year olds on the gridiron.

When I was in high school, the Ohio River froze over (almost) solid.  People decided the chance to walk from Indiana to Kentucky (and vice versa) across the ice was too fun to pass up.  Several fell through the ice and were swept away to their deaths by the current.  The grandfather of a friend described the phenomenon as “God’s way of getting rid of the idiots.”

Twitter is like the frozen Ohio.  It reveals unbalanced morons as quickly as any psychological evaluation.  Lucky for Alabama and Auburn fans they live far enough south that the rivers can never freeze.  The spring thaw would reveal corpses that would perfectly match the combined capacity of Bryant Denny and Jordan Hare Stadiums.

In the midwest, college football still only qualifies as a diversion instead of the religion it is in SEC country – and that is anything but a compliment to our friends to the south.